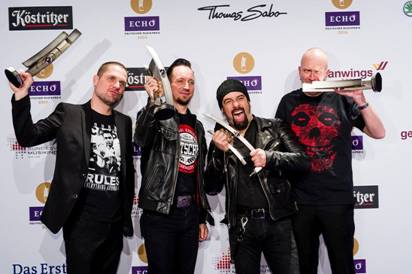 Denmark — Volbeat returns to North America this week on a tour that takes the band coast-to-coast.   The run begins at The Fillmore in Denver, CO on April 3, and will wrap on May 10 at the Susquehanna Bank Center Arena in Camden, NJ.  Sold-out appearances include Denver, CO (4/03 – Fillmore), Mescalero, NM (4/04 – Inn of the Mountain Gods Resort), Anaheim, CA (4/06 – The Grove), Spokane, WA (4/11 – Knitting Factory ), Missoula, MT (4/15 – Wilma Theatre), Fargo, ND (4/17 – The Venue), Niagara Falls, NY (5/05 – Rapids Theatre) and Hampton Beach, NH (5/09 – Hampton Beach Casino Ballroom).  The majority of the dates on the band’s itinerary are close being sold-out as well.  Trivium and Digital Summer will support Volbeat on this excursion.

This past week, Volbeat won Germany’s Echo Award for “Best International Alternative Act” (pictured above).  The quartet was selected over other contenders in the category 30 Seconds To Mars, Placebo, Imagine Dragons, and Black Sabbath.

Since the release of the band’s latest album Outlaw Gentlemen & Shady Ladies via Republic in the U.S., the title has sold more than 300,000 copies according to Soundscan, alongside hundreds of thousands of digital singles. Volbeat received their first Grammy Nomination in the “Best Metal Performance” category for “Room 24” (Volbeat Featuring King Diamond).  The band’s repertoire has become a staple at Active Rock radio, cementing the band’s relevance with five consecutive #1 singles at the format.  Their latest “Dead But Rising” climbs to #3 this week at Active Rock.  Overseas, Outlaw Gentlemen & Shady Ladies has been certified platinum in their home country of Denmark, alongside Germany and Austria, with gold sales in Finland.

Since forming in Copenhagen in 2000, Volbeat has released five studio albums, and two live offerings that have turned the band into superstars, collecting platinum discs and prestigious awards making them one of the most talked about bands around the world. Outlaw Gentlemen & Shady Ladies, debuted at No. 1 in the band’s home country of Denmark alongside Canada, Germany, Norway, Switzerland and Austria. The new release saw a debut at No. 2 in Finland, No. 4 in the Netherlands and Sweden, and No. 9 in The United States.  Volbeat is Michael Poulsen (vocals/guitar), Anders Kjølholm (bass) and Jon Larsen (drums), joined by former Anthrax/The Damned Things guitarist Rob Caggiano, who produced the new album with longtime Volbeat co-producer Jacob Hansen.

The upcoming tour marks Volbeat’s fourth visit to North American this album cycle, and follows an excursion as headliners of the Monster Energy Rock Allegiance Tour in August and September, 2013.   This past year, the band has been one of the largest touring draws on the European continent headlining both festivals and a arena tour, and they appeared at the major Japanese festival Summer Sonic 2013 in both Tokyo and Osaka.  Cumulatively, Volbeat has performed for over a million fans since the current album was released.  Confirmed appearances for Spring, 2014 include: