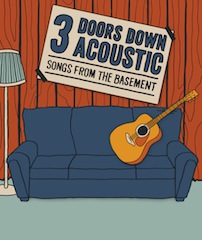 “SONGS FROM THE BASEMENT” WILL NOT BE DENIED!

Band Has Been “In The Basement” Digging Up Additional Repertoire

For Run Set To Commence May 30th In Friant, CA

3 Doors Down has announced Summer plans that feature additional “3 Doors Down Acoustic – Songs From The Basement” dates fueled by public demand alongside select plugged in electric dates at festivals in select markets.  Fans have embraced and celebrated the band’s acoustic touring since they first began staging these performances in January featuring deep cuts and hits from their catalog of songs.  Over the last few months, they have been “in the basement” digging up more gems to perform on these upcoming shows alongside their biggest hits.   Limited VIP tickets featuring on stage seating will be made available offering the rare chance to “sit in the basement with the band” in this intimate, live setting.  Singer Brad Arnold shares, “The acoustic shows are a blast, and we have an amazing connection with our fans during the performances. We are excited to get back out on the road and play these songs for the rest of America!”  Arnold has posted a video coinciding with this announcement: http://bit.ly/1qoLnCK

Brad Arnold, Chris Henderson, and the members of 3 Doors Down have assembled in a Nashville studio to begin writing songs for their sixth studio album to be released in 2015.  Alongside the founding members, the new repertoire is a collective effort with all members participating in the writing process.

On June 28 & 29, 3 Doors Down will appear at the Kadena Air Base in Okinawa, Japan for Freedom Fest.  They will also perform on the 4th of July at the Joint Base Pearl Harbor – Hickman in Oahu, HI.  The band has repeatedly committed their energies to supporting the troops across the globe.  This marks the 3 Doors Down’s return to the Islands, having performed at the Marine Corps Base Hawaii on July 5, 2008 in Honolulu.  The Okinawa visit marks their first show in Japan.