In November of each year, The After Dark Horror Festival, and the 8 Films to Die For, are released in theaters across America. In 2006, I saw several of these films, and in 2007, their were no theaters close enough to take in the latest horror concoctions. Lucky for me, the second series of the 8 Films to Die For have been released to DVD.

Like most of the films in the series, The Deaths of Ian Stone has your basic no name cast, but doesn’t suffer as a result of it.

Mike Vogel (Cloverfield) plays the character Ian Stone who is quickly established as an American who in a twist of fate is killed only to wake up in a new life, only to start the chain all over again. Instead of living the same day all over again, ala Ground Hog Day, He is killed and reborn into a new life at precisely 5:03 each day.

As the mystery unravels, you will find out why Mr. Stone is being killed, and who is killing him, with a cool climax that almost begs for a sequel.

This movie borrows from several flicks that I have enjoyed including The Matrix, Aliens, The Butterfly Effect and more. While it may not be 100% original, it does introduce some new ideas instead of just being another lame slasher or torture flick. The story was just interesting enough to keep me curious, and the special effects were pretty good, for a low budget movie.

If you are a fan of horror movies, you may want to rent this one and give it a shot. I thought it was cool, and you might too!

For Danielia Cotton, What You See Isn’t Necessarily What You Get The Singer’s “Testify” Leaves No Reasonable Doubt: She’s a Rock Star The adage has endured for decades: “Never judge a book by its cover.” In the case of Danielia Cotton, it couldn’t be truer. Her sophomore album ‘Rare Child’ (May 20th, Adrenaline Records/ADA) is the only evidence a listener needs. Danielia may be lovely and petite, but it’s undeniable that her music’s effortless range from gritty “down home” blues to soaring rock stature shouldn’t be ignored. She plays grab-you-by-the-soul music with emotional intensity. When fans and supporters entered a recent sold-out show at New York’s Cutting Room, they were immersed in a spine-tingling performance from a woman whose voice surpasses extraordinary. Audience members were left in awe, whether she was singing hymns with her family or rocking out on guitar with her band. Now she’s making moves on a promo tour throughout the country to support a surge of well-earned radio airplay — “Testify” is currently one of the top songs being added to AAA radio stations nationwide, according to FMQB. Danielia breathes fire into ten rock and soul gems on her album ‘Rare Child,’ which follows her critically acclaimed 2005 ‘Small White Town’ release. All Music Guide called her “a fiery blues-rock artist,” while the Philadelphia Daily News compared her singing to the “emotional power of Janis Joplin… Danielia’s music has the swagger of Let It Bleed-era Rolling Stones.” Listen to Danielia’s “Testify” Here! Get “Testify” on iTunes Here! 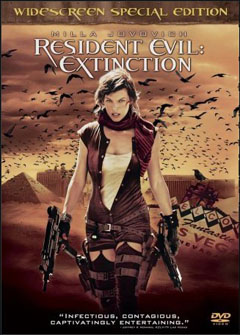 Back in 1996, I purchased and played the first horror survival game on the Sony Playstation, called Resident Evil.

I thought the game was extremely cool, but never in my wildest imagination, did I think this game would spawn several sequels, and three movies years later.

The premise of the movie is this: The Umbrella corporation who created the T-Virus, that turned the population of Raccoon City into a bunch of zombie’s. The Umbrella Corporation thought they controlled the outbreak of the Virus. As we find out in Resident Evil: Extinction, the outbreak of the T-Virus was not
controlled, turning the majority of the world’s population into man eating zombies.

Milla Jojovich resumes her role as Alice, and where Alice goes, you can bet

there will be plenty of dead zombies as a result.

A small band of survivors fight against all odds to find safe haven, against this
apocalyptic future.

I have always been a fan of Sci-Fi, action flicks, and this movie seems to borrow elements from The Planet of the Apes, Road Warrior, Night of the Living Dead, and Alfred Hitchcock’s The Birds. Although it isn’t completely original, it is a good popcorn flick, and one worth checking out.

Milla Jovovich is joined by a solid cast, which includes Ali Larter (Heroes), Mike Epps, and the R&B singer Ashanti in this final sequel of the Resident Evil Series.

If you enjoyed the first two movies, you are sure to like this one too. Check it Out! 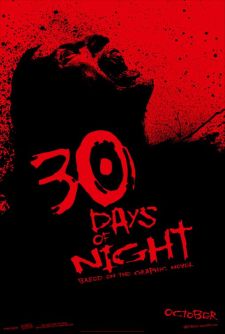 This movie is based on the Graphic Novel by Steve Niles & Ben Templesmith.

When the tiny town of Barrow, Alaska has their 30 Days of Night, some unwanted visitors come to town, A pack of blood thirsty and ravenous vampires. It is up to Eben (Josh Hartnett) and Stella Olsen (Melissa George) the husband and wife sheriff team to save the town.

I have seen many vampire films in my time, and I didn’t expect to see anything new with 30 Days of Night. Not only did 30 Days of Night show me some new things, it exceeded my expectations .

This movie has plenty for horror fans to love. Some Scenes will make you jump. Some will have you on the edge of your seat. Some scenes are extremely gory. Nonetheless, 30 Days of Night is the best horror film on the market during the Halloween season.

I enjoyed this movie and think it is well worth your time and your money! Go Check it Out!

It is getting closer to Halloween, and at this time of year, I usually take in a lot more movies of the horror variety.

Writer Mike Enslin (John Cusack) is a writer about haunted place, and is a major disbeliever in ghosts as he has never seen one.

A mysterious postcard shows up, and warns him not to enter room 1408 at the Dolphin Hotel in New York City. Of course, sending a postcard like this to a ghost hunter of sorts is like giving candy to a baby. It is inevitable that he goes to the Dolphin to check out room 1408.

What happens behind the closed hotel door will amaze you, if not completely creep you out, and a few things that may even make you jump!. It is a good story, and one that fans of Stephen King’s the Shining will likely enjoy.

1408 is the perfect movie to turn out the lights, and prepare for a good scare. Definitely rent worthy, and for horror fans, a worthy purchase.

Here is the trailer for the movie!

Rob Zombie, who previously wrote and directed The Devil’s Rejects (2000) and House Of 1000 Corpses (2004), offers an entirely new take on the highly successful series of Halloween films that began in 1978. Zombie turns back time to uncover the making of a pathologically disturbed, even cursed, child named Michael

Also heard in the film and on the soundtrack are “Let It Ride” (Top 30, 1974) from Bachman Turner Overdrive, “God Of Thunder” (1976) from KISS, The Misfits’ 1982 “Halloween II” (which was not connected with the film), a new version of “Mr. Sandman” recorded by Nan Vernon and produced by Tyler Bates, as well as the Bates’ composed “The Shape Stalks Laurie.”

Besides the soundtracks to House Of 1000 Corpses and The Devil’s Rejects, Zombie’s horror film musical exploits includes 1999’s innovative Rob Zombie Presents…Frankenstein, for which he created a mixtape of dialogue and score from the three classic original Frankenstein films.

Rob Zombie has sold over 15 million albums worldwide and continues to be one of Geffen Record’s top selling artists.

Director/Producer Sam Raimi is at it again!

Check out the trailer for the new horror movie featuring Josh Hartnett, Ben Foster and Melissa George coming in October.

This one looks like it has a lot of potential!

Part Two of my Friday the 13th Creature Feature, was an episode of the Masters of Horror TV Show. This episode, called Pro-Life was directed by the legendary John Carpenter, and features actor Ron Perlman (Hellboy).

The gist of the story is this, a daughter of a Pro-Life family seeks help after being raped. The father and his family is hell bent on stopping the doctors from hurting her.

What they quickly find out is there is more than meets the eye with the pregnancy of this young girl.

Without telling you anymore, there is plenty of horror fans to love. Plenty of gore, intense drama and………… ah, but that would be telling. It is only an hour long, and another flick that is worthy of a rental. Check it Out!!

Check out the trailer below if you are interested.

I am a sucker for the Species movies, and I thought I would share the new trailer from the 4th chapter of the Sci Fi/Horror Flick Species. Enjoy!