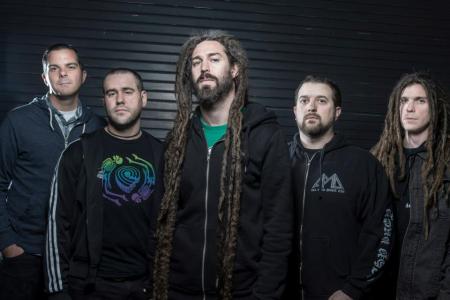 Current members of Killswitch Engage and Shadows Fall and ex members of Overcast and Cannae have combined forces in the project Death Ray Vision and their debut 12 song album “We Ain’t Leavin’ Till You’re Bleedin’” is available everywhere on Bullet Tooth now!  The album can be purchased at Best Buy, FYE, MerchNow, Newbury Comics, Vintage Vinyl, Amoeba, downloaded at iTunes, Amazon, BandCamp, Google, and streamed at Rdio  Spotify, YouTube, and LastFM.
The new DRV music video for “Barfly” is premiering on VEVO  Check out the video below directed by Jarvis and produced by McFarland & Pecci. The video was filmed in the band’s home state of Massachusetts and shows the band doing what they do best, crushing a live performance!
These veterans of the Boston metal scene play a raw brand of metallic hardcore that recaptures the energy of their old school hardcore roots infused with all they have learned and experienced as musicians over the past decade. Produced by legendary hardcore guru Dean Baltulonis who has helmed albums for Sick Of It All, Agnostic Front, Madball and Most Precious Blood, these new songs are short blasts of energy and intensity built on thrash metal rhythms and chugging guitar riffs.
“Its a swift 30-minute kick to the nuts. No fucking around and
right to the point.” – Brian Fair (Shadows Fall / DRV Vocalist)
You say you like circle pits? You say you like Punk and Hardcore? You say you hate your parents? Well this is the band for you! Pissed off and abrasive, Death Ray Vision is dedicated to that old skool passion and aggression you still crave. If you’re a fan of Cro-Mags, Leeway, Suicidal Tendencies or Bad Brains, then look no further. Without fail, Death Ray Vision delivers uppercuts straight to your gullet, then repeatedly peppers your forehead with sledgehammer fists. That’s right, the beatings are swift and pummeling on this record, with 2 minute anthems of ruckus chaos, party jams. The perfect soundtrack to set the city a blaze, or discreetly create a mosh pit in your bedroom.
“Break out your boom box and get ready to shred that mini ramp kids … The Energizer Bunny
has nothing on Death Ray Vision.” – Mike D (Killswitch Engage / DRV Bassist)
Death Ray Vision “We Ain’t Leavin’ Till You’re Bleedin’” Track List:
01. We Ain’t Leavin’ Till You’re Bleedin’
02. Over My Dead Body
03. Barfly
04. Condemned When You Were Born
05. Fuck Compromise
06. Live Fast… Never Die
07. Break Every Chain
08. This Is Progress
09. Choke
10. Your Shallow Grave
11. False Prophet
12. A Forest (Of Kegs)
Their debut 5 song EP “Get Lost Or Get Dead” was released on Bullet Tooth in 7″ Vinyl, Digipack CD, and digital download formats on May 14, 2013.  Buy the Digipack CD, 7″ Vinyl, and Tee Shirts at MerchNow, download at iTunes, Amazon, or Emusic, and stream at Spotify and Rdio. The first song “Shattered Frames” can be streamed at YouTube!
According to vocalist Brian Fair, “When Mike and I first met, we went to see Leeway and Breakdown play in Boston.  My love for raw, metallic hardcore began that day and the energy and insanity in that club is something that has stayed with me forever.”
After breaking their silence onstage at local Boston hardcore shows, Death Ray Vision entered Mad Oak Studio in MA with producer Benny Grotto to record their debut EP “Get Lost Or Get Dead”.  The recording, which the band self released, captured the raw energy and emotion of the band combined with a modern production, seamlessly bridging the gap between the past and future.  The sessions were the creative spark that inspired the band to continue writing and see how far they could push their sound.
“We started the band to have fun, there is really no other reason to do Death Ray Vision,” states bassist Mike D.  “Apparently we were having so much fun when we started writing for the 1st EP that we just kept writing and writing. All of a sudden, we had a crap load of tunes.”
While gathering material for a full length release, Death Ray Vision caught the attention of Bullet Tooth, a label that has a staff with very similar backgrounds and history in the heavy music scene as the band.  Having a label that embraces the same DIY ethic as the band was a necessity. Joining forces with Bullet Tooth was the perfect way for Death Ray Vision to reach a wider audience without having to sacrifice the independent spirit of the band.
“Josh Grabelle and Bullet Tooth have the capacity to get our record out to more people then we can reach on our own,” explains Mike D. “It also doesn’t hurt that he is an old friend and is really excited about DRV. What more could you want?”
Grabelle is as enthusiastic about the signing as the band is. He’s known the members for years, almost signing Killswitch Engage in 2000. “I’m a huge fan of Shadows Fall, Killswitch Engage, and Overcast,” he said. “I first met Brian Fair in 1995 at an Overcast show in Erie, PA. I’ve been friends with Mike D for years as well.  Mike D told me he had started a new band and I already knew it was gonna be awesome, and it was! I was honored they thought of me and Bullet Tooth and I know we will knock it out of the park together.” The exclusive signing announcement and DRV interview is located at MetalInsider.com.
Death Ray Vision recalls the insanity of the old hardcore days while remaining focused on destroying the future and is currently the #1 Metal Band on Music Choice!
_____________________________________________________
“The quintet nail the sound they’re going for, and fans of S.O.D., Municipal Waste or
Nuclear Assault may display demented grins as they make this the soundtrack to
windmilling their hair all the way to the chiropractor’s office.” – Alternative Press (May 2013)
_____________________________________________________
Death Ray Vision is:
Brian Fair – Vocals
Mike D. – Bass
Pete Cortese – Guitar
Zack Wells – Guitar
Colin Conway – Drums
For More Info: