Buckcherry has released their third video in support of their new album “Black Butterfly“.  Check out the new video for the song “Rescue Me” below. 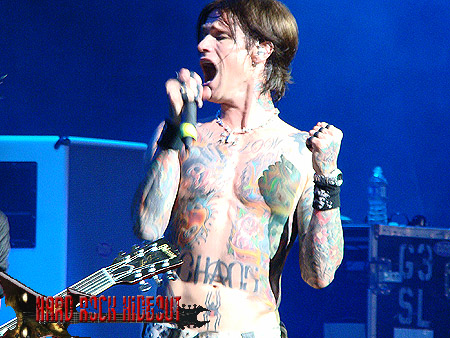 Black Butterfly debuted at #8 on the chart, the highest debuting rock album.

“Buckcherry keeps letting it rip,” said People magazine in a 3/4 star review of the album.

“There’s no denying it, Buckcherry is what in-your-face rock ‘n’ roll is all about.”—Associated Press

Dubbed the Next Great American Rock Band, Buckcherry, who just two years ago performed to rooms of 200 people, are currently playing to crowds of tens of thousands.  A full tour itinerary is below.

You can check out the video for “Too Drunk…” below!

I don’t make it a secret that Buckcherry is one of my favorite bands out there so of course I jumped at the chance for the opportunity to interview guitarist Keith Nelson. I thought it was a great interview, there were a lot of questions I didn’t get to ask because there wasn’t enough time but that is ok I will save them for the next time. Here is what he had to say, Enjoy!

HRH: Buckcherry recently wrapped up the inaugural Cruefest, how did you think the tour went

Keith Nelson: I thought it was phenomenal, a lot of fun

HRH: What were some of the other bands on the bill that you watched when you had a chance?

Keith Nelson: Papa Roach they are a great live band and of course the Crue they were just over the top.

HRH: Do you think Buckcherry will go out with Cruefest next year?

Keith Nelson: Definitely if we get the chance.

HRH: Buckcherry did over 300 shows in support of 15 are you looking at the same kind of tour for “Black Butterfly”?

Keith Nelson: We were thinking of maybe 600 or 700. Just kidding, Yeah you know we are a live band and that is what we do so going out on the road and living out on the pirate strip as they call it and making rock-n-roll 6 nights a week is kinda what we do.

HRH: 15 was recorded in 15 days how long did it take to record “Black Butterfly”?

Keith Nelson: 21 days on this record

HRH: When it comes to writing is everyone involved or is it you and Josh?

Keith Nelson: Everyone is involved, every song ultimately ends up in the room with all 5 guys weighing in regardless of where it starts. A lot of times Josh and I will come up something, get it pretty much completed, take it in and start rehearsing it. I want to hear what the other guys in my band think of it and see if they have any ideas.

HRH: Is there a story behind the title “Black Butterfly”?

Keith Nelson: Not really, well I guess the only story is there was a song called “Black Butterfly” that we all loved but ultimately didn’t make the record. Not because it was inferior to anything else but in the big picture of the record that piece just didn’t seem to fit, we loved it and certainly it will see the light of day at some point. But when we were coming up with concepts for the cover the image of the Black Butterfly was kind of stuck in my head so I proposed that as the title of the record and everyone seemed to like it.

HRH: So far there are 3 songs available for the fans to hear with, Too Drunk, Rescue Me, and Don’t Go Away, what are some of the other songs you like off the album?

HRH: Was the band surprised by the reaction of “Too Drunk” when it was leaked?

Keith Nelson: You know it is crazy how that all went down cause we actually finished mixing the record on a Sunday and 3 or 4 days later we left to start Cruefest, while that was all kind of going on while we were out of the road. Obviously it is in our best interest to present our record in a very structured, you know thought out way and with all the songs being passed around to different people for mastering, remixing, and what not unfortunately that song leaked. In this day and age we just kind of make the best of what we got so once the song was out there we just kind of had to follow it but it wasn’t our first choice for what the single was going to be.

HRH: You always have extra songs on the singles and imports, has there ever been any talk of putting out a B-sides album?

Keith Nelson: Yeah, I mean there hasn’t actually been any talk but it’s funny because early on the B-sides were very much, well you could tell why those songs weren’t on the record and now the left over tracks are as good as anything on the record but you can only put so many songs on a record. You never know I’m sure at some point after we have more of a discography behind us there will be some more special stuff.

HRH: After “Time Bomb” Buckcherry went on hiatus and you and Josh end up recording some songs with the guys from Velvet Revolver. The story goes there were 10 or so songs recorded is there a chance they will ever be made available to the public?

Keith Nelson: Well what happened with those songs is they were actually live recordings that we would make in a rehearsal room, they were multi-tracked. We didn’t make a record but we did do a very detailed recording of them in a live situation. They do exist, I do have them but they will never see the light of day.

HRH: In the past you played with Huck Johns and now he is playing with JB, Devon, and Yogi in a project called Black Robot. Is that something you helped put together?

Keith Nelson: I have no knowledge of that and know nothing about it.

HRH: Legend has it that you and Josh started Buckcherry because you both love AC/DC. Have you had a chance to hear their new single yet?

Keith Nelson: No but I am so excited about the new AC/DC record you have no idea.

HRH: With Cruefest finished and “Black Butterfly” tour starting up who are some of the bands you are looking at opening for you?

Keith Nelson: Well we start this next leg of the tour in a few days with Avenged Sevenfold, Shinedown, and Saving Abel, which are all great bands that is going to be a fun, fun tour. Airbourne is awesome, I would love to have Airbourne and we are actually going to do some dates with those guys in Japan.

HRH: If you could put together a Cherryfest and you could have any 5 bands past or present on the bill who would it be?

Keith Nelson: Well we would have AC/DC close the show for us and we would go on right before them. Right before us or maybe flip flopping every night we would have Stone Temple Pilots and Rage Against the Machine and I would probably get Muddy Waters to start things off.

And with that we wrapped the interview up, like I said earlier I think it was a great interview, very relaxed and laid back Keith was extremely easy to talk too. I definitely look forward to talking to him again if and when I get the chance.

Buckcherry has released their second video off in support of their new album, Black Butterfly.

Check out Don’t Go Away below!

Buckcherry was one of the bands at Cruefest that I was looking forward to almost as much as Motley Crue.  I have heard by quite a few folks that Buckcherry puts on a great show, but I never caught them live until Cruefest.

Buckcherry’s set list included the songs, “Lit up”, “Next To you”, “Everything”, “Broken glass”, “Sorry”, “Too 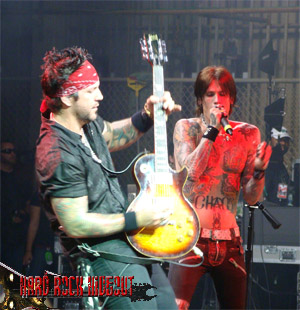 Drunk” and an over 13 minute version of “Crazy Bitch” to close the show out.  “Crazy Bitch” was one of the songs that I was looking forward to.  I thought this extended version was a little bit too over the top, and way too long.  Buckcherry could have added two more songs to their set by the time they got done with this one. I would have loved to have heard a couple more of their older tunes.

Aside from the “Crazy Bitch” performance, I thought Buckcherry was very good. Josh Todd is a very good front man, and the band is very tight. I never put much thought into Buckcherry’s guitarists, but both Keith Nelson and Stevie D. were very good.  Their performance wasn’t quite as athletic as Papa Roach’s, but they were fun to watch nonetheless.  They are definitely one of the better bands on the Cruefest bill.

I am hoping to catch Buckcherry again in September at X-Fest in Dayton, Ohio with Avenged Sevenfold. Hopefully, they will do a normal version of Crazy Bitch the next time around.

You can watch the edited Crazy Bitch video here. (I cut out the 3 minute monologue at the beginning of the song). 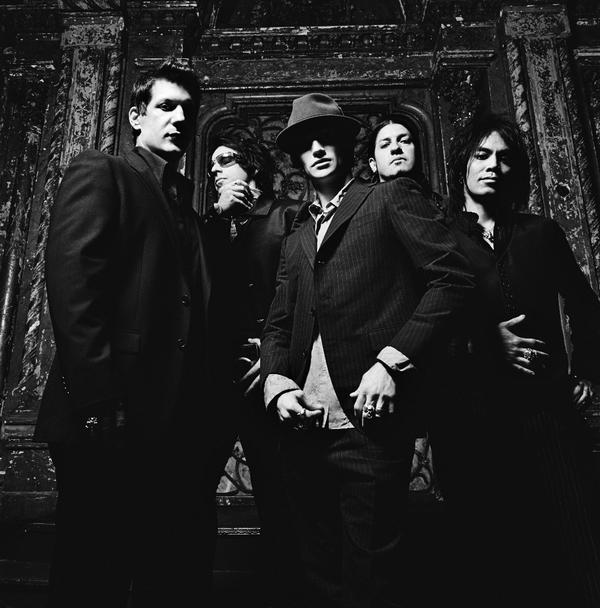 Presale starts Thursday at 10am.  The password is batbuck.  Public onsale is Saturday.

Buckcherry has posted a new song off of their up and coming album, Black Butterfly. You can download the song “Rescue Me” for free off of the Buckcherry myspace page at this link! 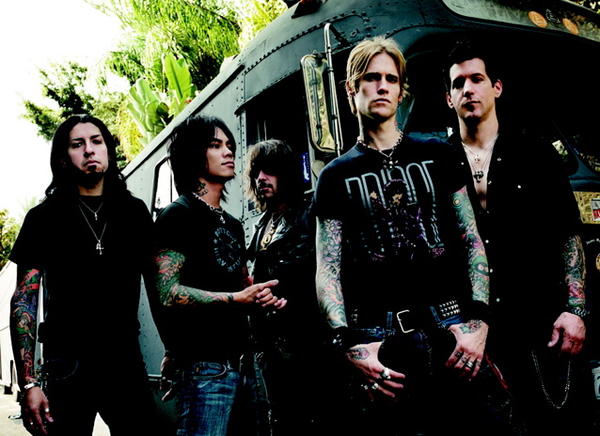 Buckcherry has a new video, for their song Too Drunk. This is the first single off of their new album, Black Butterfly that is due in September.

No song listing yet, but Amazon.com does have this disc listed now.

You can view the cover art below. 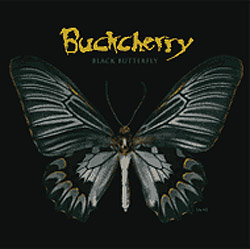 You can download the brand new song, Too Drunk Too Fuck, at the links below:
BUCKCHERRY’s “Too Drunk to Fuck”: