The first single, “Good Man,” has already sold close to 10,000 singles online, and has been heating up the Active Rock radio airwaves since its release last month, and as a result, it’s currently bulleted at #29 on the Mediabase Active Rock chart and is bulleted at #32 on Billboard‘s Active Rock Tracks chart.  It’s getting spins SiriusXM’s “Octane” channel (where it was the #2 most played song last week and is currently #13 and climbing on the weekly “Big Uns” countdown), WIYY (Baltimore), WJJO (Madison), WIIL (Chicago), WBUZ (Nashville), KILO (Colorado Springs), WBYR (Fort Wayne), WQBK (Albany), WWBN (Flint) and others.  Program Directors at stations around the country have been chiming in about their excitement about the new music:
“’Good Man’ is a stand out song from the first listen.  Egypt Central was a big band for 98Rock, and the early signs are this could be bigger!  I wanna be a ‘Good Man!’”
— Steve Huber – WIYY/98Rock (Baltimore MD)

“Awesome song!  Already getting good research.  It’s nice to get a solid record like this to play, and I feel it’s going to be a big hit in Colorado Springs.”-  Jack Mehoff, KILO (Colorado Springs, CO)

Iconvsicon.com described the album as a “…powerful wall of sound,” while Metalholic.com noted, “TIME & PRESSURE does justice to their reputation for crafting great rocks songs with an empowering message” and Ampkicker raved, “This is a brutally good record.”  And Emurg.com agrees:  “TIME & PRESSURE is an album filled with in-your-face lyrics, guitar driven tracks, and an energy that keeps the listener on their toes throughout the entire duration of the album.”

In touring news, DEVOUR THE DAY will perform their first-ever concert in Flint, MI on Saturday, May 11 at the Machine Shop, followed by shows with Buckcherry and Hinder, as well as a trek with Sevendust and Otherwise.  Joining Allison and Walser on the road will be Bury Your Dead/Walls of Jericho drummer Dustin Schoenhofer and former Egypt Central guitarist Jeff James. 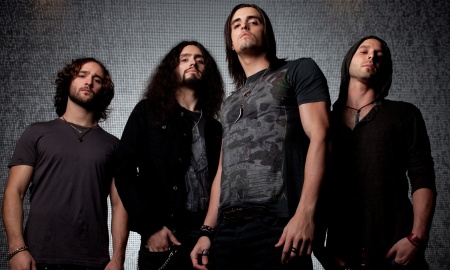 Los Angeles-based rock band Abused Romance has kicked off their spring U.S. trek in support of their Freeway Records debut album Shine with fellow rockers Egypt Central. Shine, which was produced by Justin Gray (Joss Stone, INXS) and mixed by Randy Staub (Metallica, U2), is available for free download at www.abusedromance.com, and an expanded version of the album called Shine – Special Addition will be available via all digital retailers on June 13th, which will include 9 live tracks from their explosive show on April 3rd at the famed Viper Room in LA. The powerful quartet who can swing from ethereal to abrasive in the space of the same song recently shot a video for their new single “Overcome,” which has hit #41 at Active Rock. The group teamed with director Robby Starbuck (August Burns Red, The Sounds, Silverstein) for the concept video depicting frontman Meir battling an evil version of himself. Watch the clip for “Overcome” here: