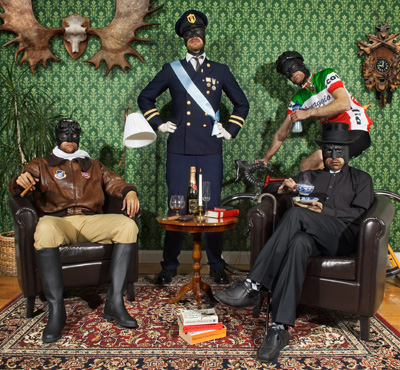 In a recent interview with Badmouthers Chris LeMon and Randy Joy the Swedish band Marvel came up during the conversation, so of course I had to investigate. What I found out about Marvel is hard to explain. With the sound of 70’s glam mixed with 90’s garage and every imaginable influence between the two Marvel have an original sound and are definitely a band hard to classify into one genre.

This trio from Linkoping, Sweden actually got together here in the U.S. when members John Steen, Ulrik Bostedt and Tony Samuelsson met in 2002 were all exchange students in Colorado. After releasing three singles the band put out their first album “Five Smell City” in ’05 and followed that with an e.p. “Unleashed” in ’06.

The masked musicians newest album “Thunderblood Heart” has been available worldwide since Feb. ’08. You can check out their version of high energy rock ‘n roll at  www.myspace.com/marveltheband or by visiting http://www.marvel.nu

You can also purchase “Five Smell City”, “Unleashed”, and “Thunderblood Heart” on I-Tunes.

Words can not do this band justice, Marvel is a band that must be heard to be understood and appreciated.

Check out their video, “Powers of Attraction” below.


Note: If you are in a band or know a band that would like to be considered for Fresh Blood you use Hard Rock Hideout’s contact page or you can email Fresh Blood at hrhfreshblood@gmail.com