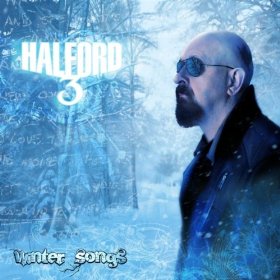 Check out the latest video from Halford, “Like There’s No Tomorrow”  This song is from the new Halford CD, Made of Metal, which is available in stores now! 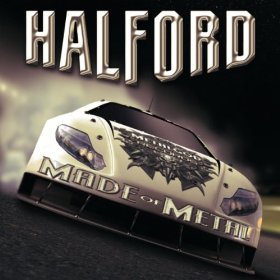 I have been a fan of Rob Halford for what least seems like forever. Halford’s debut solo effort Resurrection remains one of my favorite CD’s to this day. Needless to say, when Mr. Halford announced his new CD, Made of Metal, I was pretty excited. If any band is going to knock Accept off the top of the METAL ladder in 2010, it has to be Halford right?

I have always felt that Halford’s solo band could give Judas Priest a run for its money talent wise.  Roy Z, Metal Mike Chlasciak, and Bobby Jarzombek are as good as it gets in Metal today. Rob Halford is and always will be the Metal God.

So how does Made of Metal stack up?  Musically speaking this disc is awesome.  It is everything that I thought it would be.  The songs are packed with blazing guitar solos, killer drumming and everything you would expect from Halford.  Roy Z and Metal Mike Chasciak are one potent combination on guitar. They deliver some of the best riffs that I have heard in 2010.  With that being said, Made of Metal is far from perfect.  There are a few weak tracks on the CD, including the lackluster title track. Rob Halford has lost a step or two in his voice, and while he still delivers a good vocal performance, he doesn’t push his voice any more than he has to.  I expected more screams from Metal’s main man, and it just isn’t here.

Luckily, the good songs far out weigh the bad. “Undisputed”, “Speed of Sound”, “Hell Razor”, “Thunder and Lightning” are amongst my favorite songs on the CD.  While Made of Metal doesn’t live up to Halford’s previous releases Resurrection, or Crucible, it is still more enjoyable than the last Judas Priest effort, Nostradamus. Even if it isn’t Halford’s best effort, it is still a heavy metal disc worth picking up.

You can purchase Made of Metal here.  For more information on Halford, please visit RobHalford.com. 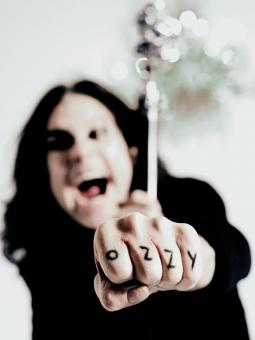 Slash To Open All Dates Of The Second Leg Of The Arena Tour Which Will Include Two Intimate Performances: Los Angeles, CA (Gibson Amphitheatre) and Phoenix Arizona (Dodge Theatre)

Ozzy to Kick Off First Leg of His Headlining North American Tour November 12, With Halford Set To Open


OZZY OSBOURNE–who will kick off his fall North American arena tour November 12 in Victoria, B.C–has now announced a second leg of U.S. dates which will get underway January 16, 2011 in Omaha, NE. The six-week 2011 trek, part of the multi-platinum Rock & Roll Hall of Fame inductee’s in-progress 18-month world tour, will include a pair of intimate shows: January 26 at the Dodge Theater in Phoenix and Feb 1 at the Gibson Amphitheatre in Los Angeles. OZZY’s longtime friend and musical collaborator Slash will open all the concerts on the second leg. Tickets for the Live Nation-produced tour go on sale beginning Friday, October 15. For the most up-to-date on sale information, please visit Ozzy.com or LiveNation.com.

OSBOURNE recently completed a run of overseas festival appearances and headlining overseas performances including his first-ever concert in Israel: a September 28 OZZFest show at Hayarkon Park in Tel Aviv.

The Tel Aviv show was described by the www.ynet.co.il as “one of the most important rock events in Israel, if not THE most important…There is no one that can contest Ozzy Osbourne’s charisma and madness. Park Hayarkon was awash with energies and foam at the main performance of the Ozzfest…” Elsewhere www.mako.co.il noted: “We have waited for years and finally it happened–Ozzfest arrived to the holy land. And as much as the anticipation was high–it shrinks in comparison to the real thing that happened on stage. Ozzy Osbourne lifted Tel Aviv with a crazy show. Osbourne managed to lift people up as only he can do. With simplicity and (relative) modesty, the prince of darkness gave his heart and soul with big love to the Israeli crowd and managed to jump and touch every single one of the tens of thousands of fans present.” The www.mouse.co.il added, “The crowd was versatile and colorful, the other bands on the bill were great, but the real star of Ozzfest was, undoubtedly, Ozzy Osbourne. The metal legend last night at Hayarkon Park gave a show worth living for.”

Later this week, OZZY will perform shows in Japan (October 16 in Kobe and October 17 in Tokyo) before returning to the U.S. to headline the Voodoo Experience festival Halloween weekend in New Orleans, LA; he will rock the three-day event at City Park City Saturday, October 30. OZZY will then launch his first leg of solo dates which includes a December 1 show at Madison Square Garden in New York and wraps December 12 at the Target Center in Minneapolis. HALFORD, featuring legendary Judas Priest front man, Rob Halford, will perform on the 2010 dates.

The fall dates will coincide with the October 5 release of an expanded two-CD version of the SCREAM album. This “Tour Edition” package will feature seven bonus songs: a mix of previously unreleased tracks and live recordings. Epic Records has also issued a four-sided vinyl edition that includes five bonus tracks: the three aforementioned songs from the SCREAM sessions and the live version of “Let Me Hear You Scream,” along with the single version of “Life Won’t Wait” (the second single from SCREAM).

More than 15 years after Ozzy Osbourne debuted OZZFest, the defining blueprint for hard rock tours and festivals returns this August in five American cities with an explosive bill co-headlines by OZZY and, in their first-ever OZZFest appearance, Motley Cure–touring together for the first time with OZZY since he invited the group on their now legendary 1984 arena tour. Expect the energy to go way off the carts at the all-day extravaganza of music and deranged merriment.

The main stage will feature full sets from Ozzy, Motley Crue and Rob Halford (who last appeared on OZZfest in 2004 with Judas Priest and Fight. DevilDriver and Nonpoint will round out the main stage line=up. Second stage headliners and six-time OZZFest veterans Black Label Society will be Joines by Drowning Pool, Kingdom of Sorrow, Goatwhore, Skeletonwitch,  Saviours and Kataklysm.

Succubi’s are defined as demons who take the form of beautiful women, in order to seduce men.  If the band Black Succubi are demons, they have taken form as metal heads who will tear your world apart with heavy guitar riffs, powerful vocals and hard crashing rhythms.

When I first read about this Scandinavian metal act, I knew they could be something special, but I had no idea they would be this good.

Not only is Black Succubi’s new disc a great new metal album, it will compete with Testament’s The Formation of Damnation for best of 2008. On this CD, I hear heavy riffs that remind me of Pantera, Halford and Black Label Society.  I love all of those bands so I found this album very much to my liking.

Jan Lundstrom is one of the best new metal singers that I have heard in a long time. When you hear the combined guitar might of Thomas Pedersen, and Michael Larsen, you will think you have died and gone to metal heaven. Black Succubi has some great guest appearances on this record as well. Mercyful Fate’s Hank Shermann adds a guitar solo on the tune “Cry For Your Brother”, and Iron Fire’s Kirk Bacharach on the song “Psychotic Meltdown”.

Bottom line, this album is heavy as hell, and absolutely killer.  No metal fan should be without this!

Go to the Black Succubi myspace page to preview some of the music on this album.  For more information on the band, check out their website at this link.  You can buy this album from iTunes and Prefueled.  Go get it!  You will be glad you did!

I received the following note from Halford Music today. I thought I would share it with you all!

As a thank you to all our existing customers and as a welcome to our new customers, download Fight’s “Christmas Ride” MP3 for FREE. http://www.HalfordMusic.com

Simply add it to your shopping cart, check out (no payment necessary at checkout unless you are purchasing something else) and download it from your download library.

Rob Halford has taken control of his music, and has released Metal God Essentials Vol.1 on his own label, Metal God Entertainment.

You are probably asking, why on earth would a disc released in 2007 be in a Rare Rock Rewind segment?! My copy was a numbered edition that was autographed by the Metal God, Rob Halford. By the time you are reading this, the 5000 limited edition autographed copies will be sold out.

Metal God Essentials is a pretty cool package. The version I

received came with a bonus CD, and a DVD with promo clips, behind the scenes and live performances in a nice digipak.

This CD is filled with cuts from the first two Halford releases Resurrection and Crucible, a few tracks from Rob’s former band Fight, as well as a couple of new cuts Forgotten Generation and Drop Out.

Metal God Essentials is full of quality cuts. If you don’t own any of Rob Halford’s music outside of Judas Priest, this is a great way to pick up some of the best tunes he ever did.

If Rob Halford continues to put out quality releases like this one, I will certainly be picking up more releases from his label as they arrive. If you are a Rob Halford or Judas Priest fan, you need to pick this up! Highly Recommended!

1. Resurrection
2. Made In Hell
3. Screaming In The Dark