It’s hard to believe that after debuting in 1992 “Leaving The End Open” is only Hardline’s third studio album. Hardline’s debut “Double Eclipse” is an outstanding album that I still listen to regularly and is as viable today as it was 17 years ago. Now while “II” was decent it did not come close to comparing to “Double Eclipse”. So needless to say I was a little apprehensive when I got “Leaving The End Open” especially knowing that neither Neal Schon or Joey Gioeli were involved in the project. But Hardline, which is now made up of Johnny Gioeli (Vocals), Josh Ramos (Guitars), Michael T. Ross (Keyboards), Jamie Brown (Bass), and Atma Anur (Drums), put my apprehension somewhat to rest when I heard “Falling Free” the second track on “Leaving The End Open” and followed it up with “Start Again” because the one thing I thought was missing on “II” was strong songs the band had found again.

“Leaving The End Open” has a good mix of rock, mid-tempo, and ballads and while not every song is a winner, there are enough here to make me want to keep listening to the album and give the whole album a chance to grow on me. Besides the two previously mentioned songs “Pieces of the Puzzle”, “Before This”, “Give In To This Love”, and “Leaving The End Open” are all strong songs and given the chance such songs as “Voices”, “Bittersweet”, and “In This Moment” will probably grow on me too.

I am gaining new respect for Josh Ramos as a guitarist and I have always thought Gioeli has a great voice and he doesn’t disappoint here, he is definitely the star of the band. The rest of the band are all solid performers with Anur standing out among the three. Hardline really shines on the mid-tempo songs here but what is missing on this album and “II” are the attitude filled dirty groove songs such as “Takin’ Me Down”, “Bad Taste”, “Dr. Love”, “Rhythm From A Red Car”, and “Hot Cherie” that were loaded on “Double Eclipse”, that is the Hardline I know and love.

While “Leaving The End Open” is definitely better than “II” it still falls way short of the expectations set 17 years ago with the release of “Double Eclipse”. 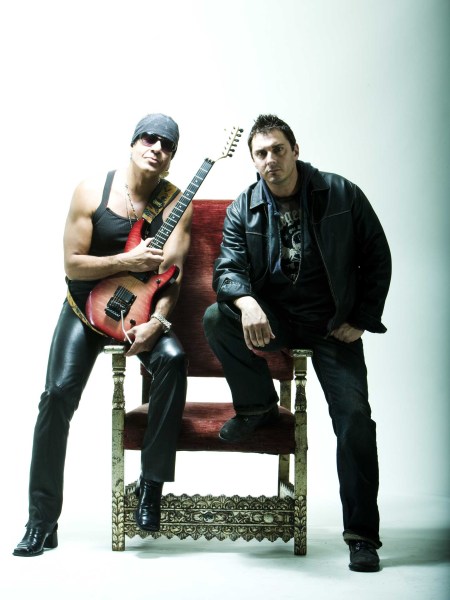 The latest disc from Johnny Gioeli and company will be released on April 17th, 2009. 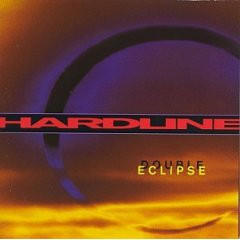 One of the better hard rock albums to see the light of day in 1992, was the debut by Hollywood, California’s Hardline.

Hardline’s quick claim to fame was having Journey guitarist Neal Schon play lead guitar for the band. There are also a couple of songs that have partial writing credits by Journey’s Jonathan Cain.

Aside from Schon’s guitar work, the highlight on Double Eclipse are the vocals of Johnny Gioeli.   He is definitely one of the better singers to come out of the hair metal era.

If this album was released five or six years earlier, Hardline, would have

made a bigger impact on the scene.  This is an extremely fun to listen to melodic hard rock disc, where every song is exceptionally good.  Some of my favorite tunes on this CD are Life’s A Bitch”, “Dr. Love”, “Takin’ Me Down”  and the Danny Spanos cover song, “Hot Cherie”.

If you haven’t check out Hardline before, Double Eclipse is still in print, and available at Amazon.com. This album will easily appeal to fans of bands like Journey and Damn Yankees.  Check them out, you will be glad you did! 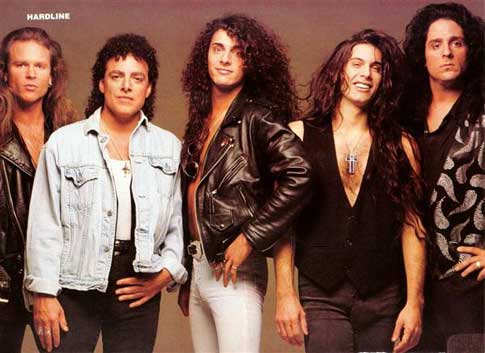 The video below is Hardline’s cover of the Danny Spanos hit, “Hot Cherie”.  The video quality isn’t very good, but the audio is good.  Check it out below! 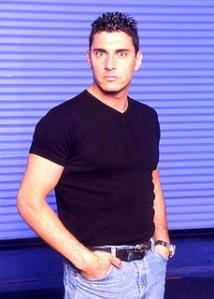 Singer Johnny Gioeli sent an official update for the fans “We are mixing and mastering the second week of September in Los Angeles! The new record combines the sounds of old and new…. Great big hooks… Yet I call it music-sushi: raw and delicious.  I can’t wait for it to be completed.

It was shelved and finally dusted off when I could concentrate on her.

Everyone will be pleased and this time we REALLY want to tour with this record!”.