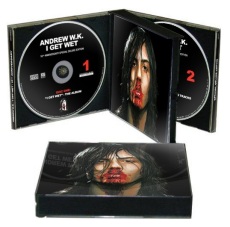 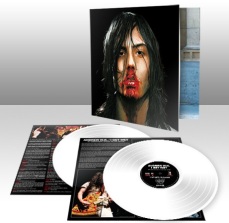 Andrew W.K. has unveiled the first look of his upcoming “I Get Wet” special 10th anniversary deluxe edition.  Shown above, this exclusive re-issue will be available as double gatefold LP edition and as a 2-CD edition, both available through Century Media on August 28th, 2012.  At first, the front cover of the anniversary edition appears to be the same “bloody nose” photograph from the original release.  However, upon closer examination, fans will notice the cover is actually a photo-realistic oil painting by artist, Gonzalo Garcia.  The packaging includes many more tricks and treats, including extensive liner notes and dozens of never before seen photos from throughout W.K.’s career, including rare shots from the recording of the “I Get Wet” album.

Originally released in 2002 by Island/Def Jam and Universal, the “I Get Wet” album was W.K.’s full-length debut and urgent rally-cry to the world.  It unleashed anthems like, “Party Hard”, “She Is Beautiful”, and “I Love NYC” to an enthralled and sometimes enraged audience, helping secure the #1 spot on the Billboard “Heat Seekers” chart.  W.K.’s sound as, Alternative Press proclaimed, “smashes up pop melodies, metal riffs and industrial beats with a hammer…”

Also to be included in the deluxe anniversary edition is a second disc/LP featuring a generous helping of never-before-heard live recordings, alternate mixes, early versions of the album’s songs, and other previously unreleased material.  For the first time ever, Andrew and his team recorded their live concerts using a special custom-designed technology with the aim of recreating the sound inside Andrew’s own ear-canals while he performs on stage.  They constructed a unique microphone enclosure disguised to look like a piece of monitor equipment which contained a specially manufactured audio system, designed to replicate Andrew’s skull.  The resulting audio is raw, chaotic, and full of live energy.  There will also be a limited number of autographed deluxe editions of the album, each containing a very special  “SOMETHING” directly from Andrew’s private collection – everything from a lock of his hair to a world tour airplane ticket stub.  The full track-listing appears below.

Earlier this year Andrew W.K. celebrated with the “I Get Wet – Ten Year Anniversary Tour” playing the entire album front to back with his full band.  The tour hit the United States, Canada, Europe, Japan, and Australia, as sold-out audiences partied with Andrew harder than ever before.  On the tour, fans were treated to W.K. shredding on his own custom-made Pizza Guitar by the ESP Guitar company!  Pitchfork TV recently featured the guitar and W.K. playing it through a double-stack of amplifiers at a Ray’s Pizza parlor in Times Square (viewable here: http://www.youtube.com/watch?v=GvuQTo3jbcA&feature=player_embedded)

8. Party Til You Puke

13. It Just Got Hotter (Sundogs Version)