AC/DC’s Black Ice Tour is now over, but the memories should live on. The following footage is from the Columbus, Ohio stop on the Black Ice tour in 2008.  Enjoy!!

This year has been a great one not only for new hard music releases, but also for live music as well.

Each day I will present to you the 10 ten live videos from HRH in 2008.  There are a few you would expect, and quite a few that you wouldn’t. 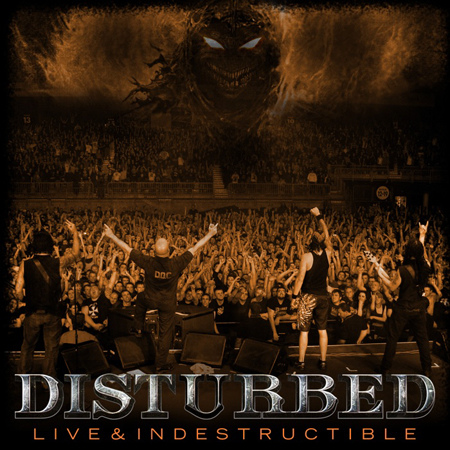 According to the Disturbed website, Disturbed is going to released a new Live CD, titled Live & Indestructible on September 30th via iTunes.  No track listing is available yet.

I will post more information once it is available.

Toronto Canada’s SOUND AND FURY had released two live videos for “Supercharged and “I’ve Got Rabies“.

Both tracks are taken from the group’s forthcoming self-titled debut, which hits stores on June 24th via Rebel Youth Records/MRI-RED Distribution.

“The videos were shot at various shows on the UK tour. The crowds were awesome, as every show was a rampage from the moment we started the set,” says frontman Luke Metcalf of the creation of the video. “I wrote the “Supercharged” music and some of the lyrics for the song one day after I got incredibly high and went and lay down on the side of a hill during an incredible thunder storm in Toronto last summer. For about two hours I watched hundreds and hundreds of lightning bolts ripping across the sky above and around me.”

SOUND AND FURY is all about power chords and no-bullshit rock ‘n roll, total sonic assault. Founded by frontman Luke Metcalf with a desire to create stripped down straight up whiskey drinking rock n’ roll, he
recruited guitarists Daz and Griffin, ex- Age of Electric bassist John
Kerns, and drummer Chris Avalos, to play the music he lives to create.
In addition to perfectly capturing their raw rock n’ roll power on the
album, the group has been gaining fans by the truckload by opening up
for Canada’s leading pop-punk band, Sum 41, throughout the great white north (as well as the U.K.).

Airbourne will be taking the stage early at the Rock on the Range Music Festival, on May 17th. Don’t miss their electric live set.

The following video was taken at the April 8th show, in Lexington, KY! Enjoy!!

Airbourne recently invaded the WZZO studio, prior to their show in Allentown, PA. Check out this link for the pictures! 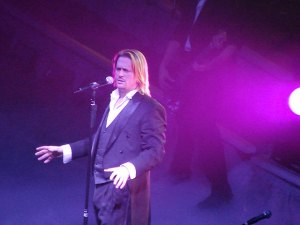 Last Friday night, my wife and I attended the Trans Siberian Orchestra Show at U.S. Bank arena in Cincinnati, Ohio.

This is the first TSO show that I have gone to, and I honestly wasn’t sure what to expect. I was well aware of TSO’s ties to the metal band, Savatage before I went to this show, but was not expecting this to be a hard rock show by any means.

In essence, this was like a hard rock show in disguise. It was definitely a Christmas themed show, but it was much, much more than that. This wasn’t an orchestra rehashing the same old Christmas songs that have you listened to 1000 times over the years.

The first half of the show, had a Narrator telling a Christmas story, in between songs. This kind of bored, my wife and I, and I could have done without this portion of the show. Aside from this distraction, the show was pretty amazing. The songs and arrangement played throughout this show, were a unique blend of classical and metal music. It was Christmas songs, redone in a fashion, that only Trans Siberian Orchestra could perform.

The show itself had it all. One of the best light shows I have ever seen live. Tons of pyro, lasers and more.
The stage was lit up in a way that I have not seen before.

Although TSO has many members, a few musicians stole the show. Guitarist (Savatage) Chris Caffery and (ex-Testament) Alex Skolnick were on fire all night. Mark Wood and his flying V, violin was a pleasure to watch as well.

This show had plenty of surprises in store for the concert goers, including a keyboard duel, a second stage in the audience and more.

If you get the chance to experience TSO live, do so. You won’t be disappointed. It is a unique live show that you can’t experience anywhere else. This show was a nice way to close out the great year of live music that 2007 brought to my area.

I was able to take one video at the show (before my camera self destructed), which was the first song of the night, Hark! the Herald Angels Sing. Check it out below!

Metal Blade Records has just inked a deal with Bay Area thrashers Hatchet! Hatchet is an onslaught of 5 thrash metal fanatics from the San Francisco Bay Area; a starting point for infamous thrash bands like METALLICA, EXODUS, TESTAMENT, and VIO-LENCE just to name a few. Formed by Julz on guitar and Slave behind the drum kit in January 2005, Hatchet was started as the two were fed up with the stale metal scene in their home town. Their desire to create music filled with substance and driving aggression would be enough to help revive a genre that had slowly began to fade away over the years in their hometown.Hatchet will be playing various one off dates until they release their new album in

spring/summer 2008 and will then be on a heavy touring schedule. Head over to the band’s MySpace page to check out some tracks to get a taste of what’s to come!

“It is an honor to be working with Metal Blade, and to be a part of the legacy of amazing artists they have worked with over the years! Together we will help bring Thrash Metal back to the top where it belongs!” – Hatchet

“In a time where thrash is making an awesome comeback, we are stoked to be working with bands that are a part of the rebirth. These guys are young, ruthless and talented and we can’t wait till they rock you like its 1984!” – Metal Blade.

Check out the video below of Hatchet performing Live!

All That Remains fans have caught the band live on the Ozzfest tour, have seen their videos on MTV’s Headbanger’s Ball, and now have something to look forward to this Tuesday with the band’s new LIVE DVD.

This DVD should keep the momentum of their debut release, “The Fall of Ideals” going strong.

This DVD captures not one, but two live shows from Philadelphia and Baltimore, during the band’s tour in 2007.

As a bonus, you also get all six of All The Remains music videos.: The Air That I Breathe, Not Alone, This Calling, Tattered On My Sleeve, This Darkened Heart and The Deepest Gray plus photos, interviews and some additional bonus material.

This is a very cool collection for All That Remains fans and should not be missed. This DVD hits the stores on Tuesday, October 30th.

Metal and hardcore fans out to grab these up quick!!

Here is the All That Remains Video, “Not Alone”. 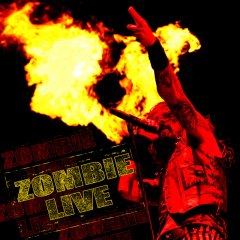 At one point in time, I would not pick up a live disc regardless of the artist. Today however, I love any and all live records that most hard rock artists put out. They capture all the little nuances of the band’s live show. It is like having your own personal concert at your disposal.

The new Rob Zombie Live disc hits stores today, and is a must have record for all of you Zombie fans. The CD was recorded in 2006 on the Educated Horses Tour. This is a pretty tight set and captures Rob Zombie and company well. The disc gives you 18 live tracks with over an hour of live music. The CD Booklet also reveals a link with some cool bonus material.

My only disappointment is that the band didn’t do I’m Your Boogeyman Live, but other than that, this is a pretty strong set list. I haven’t seen Rob Zombie Live, but after hearing this disc, I will certainly be catching him the next time he comes into town.

If this CD doesn’t whet your appetite for the up and coming Rob Zombie / Ozzy Osbourne shows, nothing else will. If you are a Rob Zombie fan, you need to get this!

You can preview the disc in its entirety at this link!

Don’t forget to sign up for the Hard Rock Hideout Ghoulish Giveaway, where you can win an autographed copy of the CD! 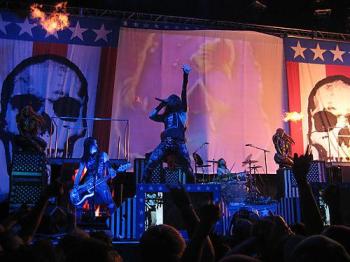 Rob Zombie has posted new audio and video clips from his first ever live album, Rob Zombie Live. Now available for our intense pleasure are live versions of “Dragula,” “Black Sunshine” and “Living Dead Girl.” Over the course of the Educated Horses Tour, Rob Zombie, in collaboration with producer Scott Humphrey, combined the most tantalizing of audio and visual elements. Rob Zombie’s heavy metal music and extreme stage presence do not disappoint in a nostalgic music video of “Thunder Kiss ’65” presented on YouTube. The much anticipated Rob Zombie Live is sure to be a hit with incredible guitar riffs, live footage and pictures from the ever-classic Rob Zombie. 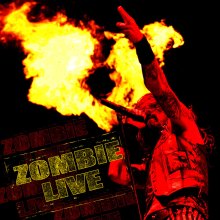 Click on the tracks below to preview the live tracks!

I am very impressed with the new Alter Bridge CD, Blackbird, and I am happy to report that band is doing a ton of songs off of the new disc.

I can’t recall the entire list, but the set list included: Before Tomorrow Comes, Brand New Start, Buried Alive, Broken Wings, Coming Home, Blackbird, White Knuckles and the first time the band has every played Break Me Down live.

The band did an Encore with a Led Zeppelin cover of Traveling Riverside Blues and an the songs Rise Today and Open Your Eyes.

I wondered if Myles Kennedy could handle some of the higher pitched vocals live, and let me tell you, this guy is the real deal. He hit every note, and was quite impressive. He is great singer, that is second to very few. Mark Tremonti was kicking everyone’s ass on the lead guitar. I think this guy must have a guitar for every new song that Alter Bridge plays.

Alter Bridge played an incredibly tight set, and had the crowd of 300 people singing along all night. It was a very good live show, and one that I would definitely go see again.

Here is a video so you can see what you are missing!

The band has a ton of dates left on this tour! Don’t miss them if they hit your town! 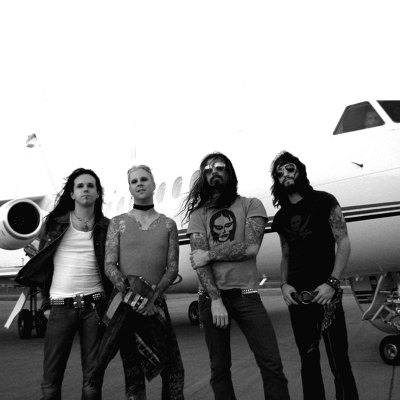 Rob Zombie has been selected as the Artist of the Month on Gametap.com. Today Gametap.com posted a new video interview where Zombie talks about his inspiration to create Zombie Live, his musical history in games, and the inception of the new Halloween remake. New videos will be posted throughout the month featuring Zombie. Rob Zombie will release his first ever Live CD, Zombie Live, on October 23rd.

Please Enter Your Name, Address and Email Address, as well as your preference of CD or Vinyl in the box below. 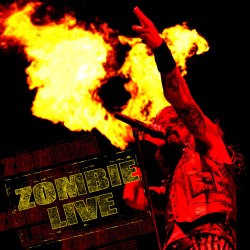