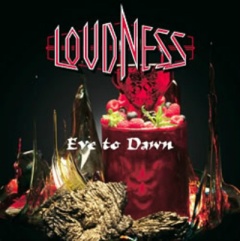 Heavy, powerful, dominate: all are good adjectives to describe Eve To Dawn, the latest record from Japan’s Loudness. This album is like a fresh kick to the groin in a world of stagnant metal. This is Iron Maiden meets Anthrax turned up to eleven! Even though they have been rocking the masses since 1981, Loudness proves that they still know how to make the hair on the back of your neck stand up while blowing out your eardrums in style.

If you haven’t followed Loudness in a while, Eve To Dawn is a good record to get you back into the band. If you’ve never listened to Loudness, Eve To Dawn is a great record to get you interested in the band (you may even seek out their back catalog after listening to this record). Innovation and style paint this disc in a musical landscape that is amazing to the ears of even the most seasoned heavy metal lover.

Songs like “Gonna Do It My Way” showcase how superb Eve To Dawn is. With smart lyrics, exceptional guitar solos, and gritty vocals from lead singer Minoru Niihara, “Gonna Do It My Way” reminds us all how much fun hard rock music can be. Blistering solos and fantastic finger work on “Hang Tough” are reminiscent of Nuno Bettencourt in his prime. “Hang Tough” is a hard and heavy rocker complete with some great rock screams, dark riffs, and mesmerizing guitar solos.

Guitarist Akira Takasaki provides chops that would put most modern guitar players to shame. The lead guitar work is some of the best that I’ve heard on any album released in 2012. Takasaki’s fret work is simply astonishing. If you are a fan of guitars, guitar solos, and a crisp thrash metal sound, Eve To Dawn should be added to your “must own” list.

The instrumental track, “Emotions” may be one of the best overall tracks on Eve To Dawn. Once again, it is Akira Takasaki’s guitar work that makes this song stand out. His playing is simply mind blowing on “Emotions.” Throughout Eve To Dawn, I continued to be amazed at the ability of Takasaki as a guitar player. The guitar work, changes, and musical prowess really helps solidify Eve To Dawn and raise it from mediocre levels to outstanding.

Eve To Dawn is a terrific record that I highly recommend for any fans of the hard rock/sleaze metal genre. It could be the biggest surprise of 2012. Just as I was blown away by the band’s M3 performance, I am once again blown away by their latest CD release. Hard rock has been made fun again thanks to Loudness and Eve To Dawn.