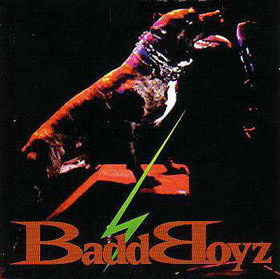 When most people hear the name Bad Boys, they immediately think about the them song from the show COPS. Well back in the early nineties, there was a short lived band named Badd Boyz that featured former Quiet Riot members Paul Shortino and Sean McNabb, as well as Mitch Perry (Talas, Steeler, Heaven), Michael Guy (Shark Island, House of Lords) and Rich Carlton.

This self titled effort was released in Japan after the band split up, and has been out of print for years.  So it this CD worth tracking down?  If you are a fan of Paul Shortino, chances are you are going to like this.  In my opinion, Paul Shortino has a very cool, and unique voice that truly stands out. I enjoyed the stuff he has recorded with Rough Cutt, and Quiet Riot, so it was only natural for me to finally track this CD down.

There are some really cool tunes on this disc including, “Leave It To The Law”, “No Time For Cryin” and “Straight To My Heart”.  I would put these songs up against anything else Shortino has ever recorded.  They are that good!

Some of the songs that the band put together  were not available at the time this CD were recorded, so Paul fleshed out the rest of the CD with the songs, “This Must Be Love”, “Hard To Say Goodbye”, “You’re Mine Tonight” and “Save Our Land”.  The only problem with doing this is, it made the CD seem a little uneven.  The whole disc is solid 80’s / early 90’s style hair metal, the second half is not quite as heavy, and isn’t as good.  There really isn’t a bad song on the CD, I just enjoyed the first half a lot more.

If you can find this at a reasonable price, I would definitely recommend picking it up.  Ebay or Gemm may be the the only way to find this rare CD from Badd Boyz!
Rating: 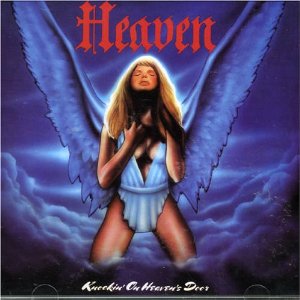 When I first heard the samples of new reissue of Heaven’s CD, Knockin’ On Heaven’s Door, my first reaction was, “How in hell have I never  heard this band before”.

Heaven is a hard rock band that started in Adelaide, Australia, and later relocated to the U.S.A.  They have three albums under their belt, and yet I have never heard a single tune from these guys until now.  Judging from the tunes on Knockin’ On Heaven’s Door, I need to find the back catalog from this band and fast.

“Show on The Road” starts the album off right with a rocker that sounds like a kick ass blend of RATT & KEEL. Every time I play this song I want to rip the knob off my stereo.  I love this!!

“Wink of An Eye” is a super catchy rocker that will have you signing along in no time.  The keyboards on the song are alittle dated, but they add just enough quirkiness to this song to make it fun.

“Knockin’ on Heaven’s Door” is Heaven’s rendition of the Bob Dylan classic.  No Guns N’

Roses didn’t do this cover first, although I like the G N’ R version better.

“No Turning Back” is another song that reminds me of early Def Leppard. The guitar that opens this song reminds me a lot of the guitar intro from “Die Hard The Hunter”.

“Last Laugh” is another hit worthy tune with that would not have sounded out of place on any of the KEEL records.  Cool stuff!

“Rock On” is a bonus track that was added to the reissue of this CD.  It is a such a great tune that I can’t figure out why this would have ever been left off of the original CD.

Overall, I am greatly surprised by Heaven.  Singer Allan Freyer sounds like a cool combination of Ron Keel and Marc Storace.  The band is way above average on the talent meter.  I am greatly surprised that they weren’t a bigger part of the 80’s hard rock scene. I don’t know how I managed to miss Heaven back in the day, but I am damn glad that I found them now.  Knockin’ on Heaven’s Door is a CD that I recommend  picking up.  It has been out of print for years, but reissued in 2010 by Old Metal Records.

For more information on Heaven, check out the band’s website at this link. You can score a copy of Knockin’ On Heaven’s Door through The Omega Order here. 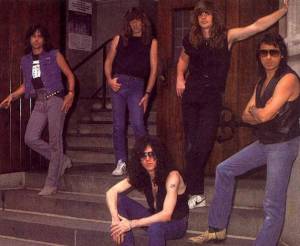