In 2013, Pink Cream 69 has released their eleventh album, Ceremonial.  Check out their latest video clip “Special” below!

The concept behind this recording is to bring back the classic Harem Scarem sound which after the band decision to split is very much missed by many fans. Records such as “Mood Swings” and “Weight of the World” are regarded as true masterpiece albums and they were the inspiration behind the First Signal songs which of course are also open to some new twists and interpretations.” The record is very reminiscent of the songs I grew up listening to and fit my vocal style”, says Harry “It definitely reminds me of the songs we were writing very early on in Harem Scarem. I haven’t been involved with anything even close to this style musically since Harem Scarem, so it was a lot of fun for me and if the fans really like it I’m sure there’ll be a future First Signal!”

Harem Scarem have displayed throughout their 12 official studio albums a vast array of styles, from AOR, to Arena Hard Rock and Power Pop in the “Rubber” years. Still the fans have always asked the band to go back to a guitar riffs oriented sound which melted the influences from the Melodic Metal of the 80’s with more contemporary sounds.

A great team of songwriters, including brothers Tom and James Martin (Khymera, Sunstorm, House of Lords), Erik Martensson (W.E.T., Eclipse), Ronny Milianowicz (Saint Deamon), Robert Sall (W.E.T., Work of Art) and Mark Baker (Signal, House of Lords) among others, had the task to recreate that magic sound, which is now back in all its glory thanks to a monster vocal performance from Harry and a crisp production and arrangement work from Dennis Ward.

Other musicians on the album include Chris Schmidt on drums, Michael Klein on guitars and Eric Ragno on keyboards and the necessary background vocals contribution from the other ex Harem Scarem member Darren Smith.

“First Signal” final tracklisting includes the following tracks: This City; When You Believe; Part of Me; Crazy; Goodbye To The Old Times; First Signal; Feels Like Love; Into the Night: When November Falls; Yesterday Rain; Naked Desire.

The songs “This City” and “Yesterday Rain” can exclusively be listened in full in streaming on the Frontiers Web radio from June 21st. Tune in at: www.frontiers.it/webradio

Frontiers Records is excited to announce the release of PINK CREAM 69’s celebration release including the Live 2 CD set “Live in Karlsruhe” and the amazing “Past and Present” 2 DVD set on October 16th in Europe.

Two years after the highly acclaimed release of the “In10sity“ album, PINK CREAM 69 are back with two impressive releases at once. Vocalist David Readman, the guitar team Alfred Koffler / Uwe Reitenauer, bassist Dennis Ward and drummer Kosta Zafiriou have packed their DVD “birthday release” with an impressing amount of content:

– the live concert from the band’s 20th anniversary show in their hometown Karlsruhe , filmed in January 2009;

– the legendary “Size It Up – Live In Japan”- video from 1992, for the first time ever to be released on DVD, featuring the band´s original singer Andi Deris (now with HELLOWEEN); 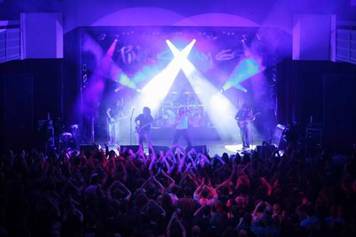 with interviews and rare footage;

This truly is the ultimate package, not only for PINK CREAM 69 fans: “Past & Present” (with a total running time of more than 4,5 hours) and “Live in Karlsruhe” includes everything a rock fan needs to have from PINK CREAM 69. “The two products” says drummer Kosta Zafiriou “give a great overview of the band´s activities in 20 years: the live in Japan video from 1992, this year´s concert in Karlsruhe, lots of Festival footage as additional bonus, all video clips the band ever did and an hour interview and backstage footage with the band members reflecting the band´s history – you can´t get more Pink Cream 69 than on these DVD´s! The concert portrayed in the “Live in Karlsruhe” night was a very special one for us – 20 years since the release of the first record, 10 studio albums, a concert in our hometown to be recorded for our first DVD ever! The feelings were overwhelming: A mixture between a nostalgic look back and the excitement about the night and the show to come…simply great!”

To sum it up, the long waiting time has been rewarded! And it gets even better: the new studio album is already in the works!

CD1: Children Of The Dawn; Do You Like It Like That; Hell’s Gone Crazy; Lost In Illusions; The Hour of Freedom; I’m Not Afraid; Talk to the Moon; Carnaby Road; Break The Silence; One Step Into Paradise; That Was Yesterday; The Spirit.

CD2: Livin’ My Life For You; Welcome the Night; Seas Of Madness; Keep Your Eye on the Twisted; No Way Out; Shame; So Lonely / No Woman No Cry; One Step Into Paradise; Better Days (European Bonus Track).

“Past and Present” contents include:

Children Of The Dawn; Do You Like It Like That; Hell´s Gone Crazy; Lost In Illusions; The Hour Of Freedom; I´m Not Afraid; Talk To The Moon; Carnaby Road; Break The Silence; One Step Into Paradise; That Was Yesterday; The Spirit; Livin´ My Life For You; Welcome The Night; Seas Of Madness; Keep Your Eye On The Twisted; No Way Out; Shame.

Take Those Tears; Welcome The Night; Do You Like It Like That; Signs Of Danger; Where The Eagle Learns To Fly; Livin´ My Life For You; Rolling Down A Thunder; Talk To The Moon; Hell´s Gone Crazy; One Step Into Paradise; Detroit Rock City; White Men Do No Reggae.

Do You Like It Like That; Lost In Illusion; The Hour Of Freedom; Seas of Madness; Shame.

One Step Into Paradise; Livin´ My Life For You; Signs of Danger; Face In The Mirror; Keep Your Eye On The Twisted; 20th Century Boy; Only The Good; Shame.

A “Past And Present” DVD trailer can be enjoyed below!

Having ten studio albums, numerous European & Japanese tours and also festival appearances around the world, the Karlsruhe hard rock institution PINK CREAM 69 remains to be firmly established in the twenty-first year of their existence.

After a storming performance of the band at last year’s cult open air “Das Fest” in Karlsuhe PINK CREAM 69 will play a show at the “Festhalle” in Durlach on January 24th, 2009. At the first PINK CREAM 69 headliner show on domestic ground since 2004 it is a matter of a very special night:

The band will record the show in their hometown to use it for their double dvd with the working title “The Past & The Present”. The show in Karlsruhe is said to be the centerpiece of a very special release which will additionally contain the legendary “Size It Up – Live In Japan” recording as well as live material, documentations and all videoclips.

PINK CREAM 69 prepares for a very special set in their hometown which will consider all highlights of the long-term band history and some tracks of the current “In10Sity” album.

The United States isn’t the only country with great music festival. Firefest V, will soon be taking place in the Rock City club in Nottingham, UK.

Check out this two day lineup: 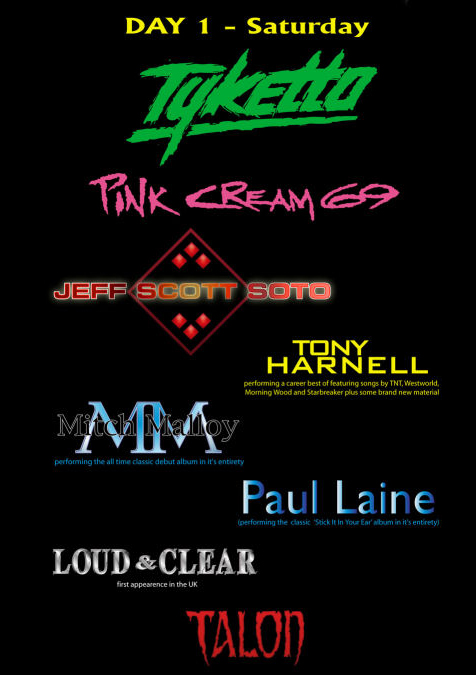 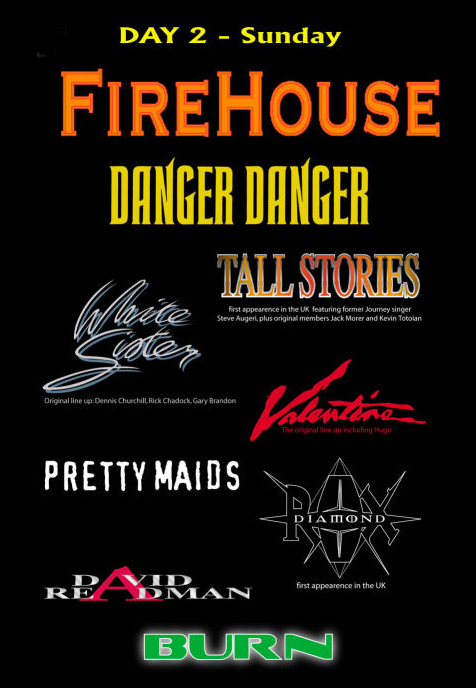 This show takes place on Saturday October 25th, and Sunday October 26th. For ticket information, check out the Firefest Website at this location.

The following are videos from Firefest IV:

Harem Scarem – If There Was A Time

Some of you may know the band Pink Cream 69, but many of you do not.

The band has released 11 CD’s since 1989. Three with Deris, and 8 with David Readman. If you are a fan of 80’s style hard rock, there is a lot of great music to explore.

A lot of bands suffer when they change singers, but Pink Cream 69, has only gotten better and stronger, with David Readman.

Pink Cream 69 isn’t well known in the United States, but they should be. These guys still rock like it is 1989. If you are a fan of 80’s style hard rock or glam metal, you need to give Pink Cream 69 a look. They have eleven studio albums, most of which are available through Amazon.com. The videos below will give you a taste of their music. Check them out!! 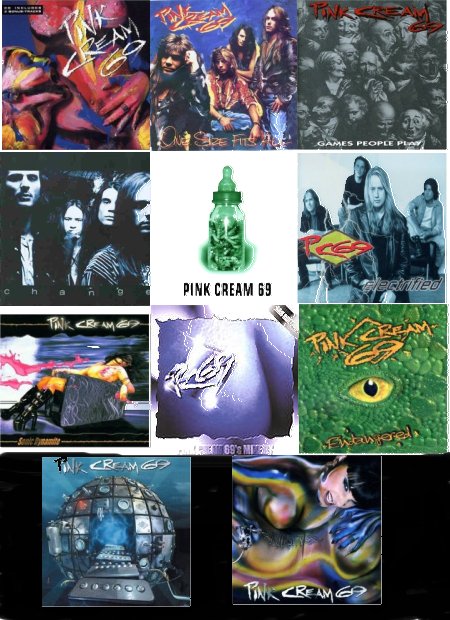