Canada’s über successful rock band, Nickelback is back with their seventh album, Here and Now. With two great albums back to back in All The Right Reasons and Dark Horse, Nickelback is making it harder and harder on themselves to top their previous works.

When I first heard the single “When We Stand Together”, I thought it was a pretty cool tune, but I was kind of fearful, that Here and Now may be a little more on the mellow side. As it turns out, the album is pretty well-balanced with some heavy rockers, and a few mellow numbers.  The album is a little on the short side, as it clocks in just shy of 40 minutes.

The album starts off right with an excellent heavy rocker “This Means War”. This is easily one of the best songs on Here and Now. “Bottoms Up” on the other hand, didn’t really do anything for me.  This party anthem is a little too grungy for my taste.

“Midnight Queen” is a crunchy up tempo rocker that does not disappoint.  This catchy tune might be one of my all time favorite Nickelback tunes.

You won’t need too many guesses to know what the song “Gotta Get Me Some” is about.  This sleazy number has some cool riffs, but I don’t care for this song very much.

“Lullaby” starts off with a keyboard sound that is more akin to U2 than Nickelback.  This mellow tune will likely get tons of plays on the radio, but it isn’t my cup of tea.

“Kiss It Goodbye” is another rocker that didn’t really excite me very much. It is just an o.k. tune that is a little too grungy in my opinion.

“Trying Not To Love You” is another slower tune, but unlike “Lullaby”, this one is pretty good. I like this one a lot better, and I think it has “hit” written all over it. “Holding On To Heaven” is a low to mid tempo number that is growing on me after multiple plays. This song could be a possible sleeper hit for Nickelback.

Here and Now desperately needed a cool rocker at this stage of the game. “Everything I Wanna Do” is a mid tempo tune that has some big riffs, but just falls flat.

I was hopeful that the album close out strong, and while the song “Don’t Ever Let it End” is a good tune, I was hoping for a little more.

Does Here and Now surpass Dark Horse or All The Right Reasons?  No, not by a longshot.  It is definitely above average, and is a CD most Nickelback fans will enjoy.  You can purchase Here and Now at this link.

Best Songs: “This Means War”, “When We Stand Together” and “Midnight Queen” 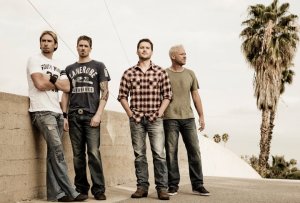 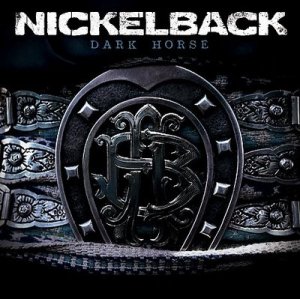 Nickelback has returned with their follow up to 2005’s multi-platinum disc, “All the Right Reasons”. This time around Nickelback has brought in superstar producer Mutt Lange (Def Leppard, AC/DC) to help craft their new album.

Like many of you, I downloaded the new single, “Gotta Be Somebody” when RoadRunner Records made it available. I don’t know if it was a preconceived notion in my head knowing who the producer was, but I thought, at least with the first single that Mutt Lange figured out a way to (Def) Leppardize Nickelback’s sound.  The first single was good enough to entice me to purchase the new album.

Prior to the release of Dark Horse, Nickelback has released a second single “Something In Your Mouth”.  My first thought was that this was a terrible choice for a song title.  Strangely enough, this song has an upbeat groove that will likely make it a crossover hit in both pop and rock formats, bad title or not.

“Burn It To the Ground” is amazingly catchy.  The guitar riff on this song had me tapping my feet, and doing a little headbangin’.  This song is one of the heavier cuts on “Dark Horse”, and an early favorite of mine.

“I’d Come for You” is a mid tempo number that ought to be released as the third single on Dark Horse.  This song could be a #1 hit for the band.  Yes, it really is that good.

“Next Go Round” reminds me a lot of the song “Animal” off of “All the Right Reasons”.  This song is a high tempo rocker with some heavy guitar elements.  Is that a guitar solo I hear?  Somebody pinch me, surely I must be dreaming. This is a Nickelback CD right?!  Mutt Lange must of broke out a can of whoop ass on Nickelback, as Ryan Peake plays his butt off. “Just To Get High” has even more guitar solos in it.  I thought this was a lost art form on today’s modern rock artists.  I leave it to Mutt Lange to get the best out of Nickelback. I love hearing Peake play like this.

The song “Never Go Alone” reminds me a lot of Hysteria era Def Leppard.  If you listen closely to the guitar parts, there are some definite similarities on this song.  This is going to be a huge hit for Nickelback.  I guarantee it.

“Shakin’ Hands” has this upbeat sexual groove that will likely help this song become a staple in strip clubs everywhere. You have to listen to the lyrics to truly understand why.

“If Today Was Your Last Day” is a little bit too much of a generic Nickelback song for my tastes.  Even though this comes across as an average tune in my ears, this will likely be a pop hit for the band.

“This Afternoon” is a song that was crafted more for the pop audience than the hard rock crowd.  This is a throw away song for me personally, but I am sure their will be some folks that like it.

Has Nickelback surpassed their monster effort “All the Right Reasons”?  I believe they have.  I thought their last album had a few good songs, but was quite a bit over rated.  Dark Horse has at least 6 or 7 songs that have single potential.  This is an album could easily carry Nickelback well into 2010 with its monster radio potential.

Nickelback fans ought to pick this one up without question.  You can buy this in the HRH music store, at this link.

Track Listing:
1. Something In Your Mouth
2. Burn It To The Ground
3. Gotta Be Somebody
4. I’d Come For You
5. Next Go Round