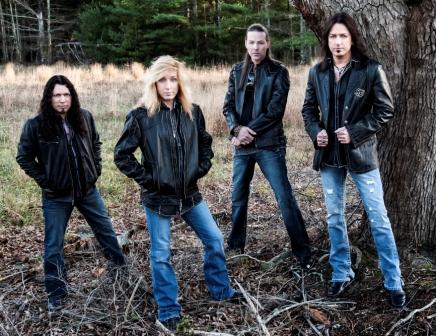 Frontiers Records is proud to announce the signing of iconic Christian rockers Stryper to a multi-album deal.  The first release due out will be a new re-recorded collection; SECOND COMING will hit streets on March 22nd in Europe and March 26th in North America.

The album features sixteen tracks, including new recordings of fourteen songs from the band’s early years as well as two brand new songs recorded especially for SECOND COMING, and is produced by Stryper frontman Michael Sweet.

Sweet commented, “We’re really excited about this record. The re-recorded songs are sounding awesome…better than the originals in many ways!  One word to describe the record? Heavier. We’ve hooked up with some great people – we’ve got new management, a great album, a great label. We just feel like everything is coming together, and hopefully some big things are to follow.”  Please see below for the complete track listing.

Stryper is one of the top Christian rock bands of all time.  Comprised of the original line-up of Michael Sweet (vocals/guitar), Oz Fox (guitar), Tim Gaines (bass), and Robert Sweet (drums), Stryper has been rocking since 1984, and is responsible for such ’80s metal classic albums as SOLDIERS UNDER COMMAND, TO HELL WITH THE DEVIL, IN GOD WE TRUST and such MTV hit singles/videos as “Calling on You,” “Free,” and “Honestly.”

After a sabbatical for much of the 1990’s, Stryper returned strong in the early 21st century.  To date, the band has sold upwards of 8 million records worldwide and is a Dove Award-winner and Grammy nominee.  Stryper is the first band to have two songs in MTV’s Top 10 simultaneously. 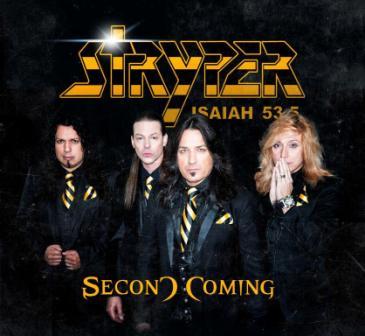 SECOND COMING track listing: Loud N’ Clear; Loving You; Soldiers Under Command; Makes Me Wanna Sing; First Love; The Rock That Makes Me Roll; Reach Out; Surrender; To Hell With The Devil; Calling On You; Free; The Way; Sing Along Song; More Than A Man; Bleeding From Inside Out (New song); Blackened (New song)

Sometimes an album is like a punch in the gut to me the very first time I hear it and I have to pick myself up off the floor afterwards. But then other times it takes an album a while before it finally hits me, which was the case with Eden’s Curse “Second Coming”. I love their debut album, I still think it is a pretty amazing album so I was definitely stoked about getting “Second Coming” when it was released. But after getting the album and several listens I was disappointed because it didn’t hit me like their debut, in fact it took almost 4 months before “Second Coming” hit me, but once it did WOW!!! What an amazing album this turned out to be it is filled with excellent well written songs.  I already knew vocalist Michael Eden is a phenomenal singer from the debut but he really kicked it up a couple of notches on “Second Coming”. The band which also consist of guitarist Thorsten Koehne, keyboards from Ferdy Doernberg, bassist Paul Logue, and drummer Pete Newdeck are all exceptional musicians but Koehne in particular puts on a guitar playing showcase on this album which is absolutely jaw dropping.

After a short intro titled “Reign of Terror” everything is kicked off by “Masquerade Ball” and right out of the gates there is no holding Koehne back who absolutely blisters this song with his playing along with Newdeck on drums. If there was ever a song to practice your air guitar to or maybe your best metal singer stance while lip syncing with a hair brush this would be the song, absolutely awesome.

“Angels & Demons” follows and it is a duet with Pamela Moore (A.K.A. Sister Mary from Operation: Mindcrime) and it definitely lives up to the album’s pre-release hype. One again there is no holding Koehne or Newdeck back, but truth be told everyone absolutely shines on this song. Eden and Moore are terrific trading lyrics back and forth, I don’t understand how Pamela Moore is not a better known name on her own as she more than holds her own with Eden.

“Just Like Judas” has a heavy thumping groove to it that makes it impossible not to tap your foot along. It also has a great sing a long chorus where Eden’s vocals really shine as once again so does Koehne’s guitar.

“Sail On” is a mid tempo rocker that was my first punch in the gut for “Second Coming”. Awesome song that will have lighters and cell phones around the world lighting up when it is played live. Ferdy Doernberg’s keyboards really set this song off without overpowering it. Definitely my favorite song on this album.

“Lost in Wonderland” was my second punch in the gut and this heavy rocker is another awesome example of the band’s songwriting skills and a great groove from the rhythm section of Newdeck and Logue.

With 13 tracks on this album there is not one song I would consider filler material but some of the other stand out tracks on “Second Coming” are the ballad “Man Against The World”, a mid tempo rockers “West Wind Blows” and “Lost Soul”, and definitely the album’s closer “Ride The Storm”.

I have always heard good things come to those that wait, I am glad I waited for that first punch from Eden’s Curse “Second Coming” it is definitely worth the wait.

When 2009 wraps up this album will be on my best of list and I really wouldn’t be surprised if it was my album of the year. Any hard rock fan out there should have this album in their collection.