Megadeth has returned with their fourteenth album Super Collider.  On their latest effort, the band has taken the tempo down, and have crafted another solid hard rock/metal album.  Megadeth’s thrash metal fans will probably throw their arms up in the air in disbelief after listening to this album. After three heavy, aggressive albums in a row (United Abominations, Endgame and Thirteen), Super Collider may seem like a bit of departure for Megadeth.  Super Collider leans more towards the hard rock side of the fence than metal on this album. Megadeth may truly have “A House Divided” after this record.

This isn’t Megadeth’s first foray in hard rock by any means. Is it a really a far stretch from the metal they usually create?!  Sure the tempo may be a little slower, but the music may not be quite as heavy, but is still very enjoyable.  One of my favorite Megadeth albums, Countdown to Extinction was more of a hard rock effort, and to this day, I still think it is one of the band’s best albums.

Super Collider isn’t without its thrashy moments however. “Kingmaker” is one the heavier songs on the album, and it is pretty damn cool! “Built For War” also teeters on the edge of thrash.  I can see this song being a staple in Megadeth’s live sets for sure!  “Off the Edge” is a catchy rocker that fits my mindset every time I leave the office. “Don’t Turn Your Back” is another tune that will definitely get your blood pumping!

“Cold Sweat” is one of my favorite Thin Lizzy songs, so I was excited to hear Megadeth’s version of this song.  It certainly does not disappoint (although JORN’s version is still my favorite). I still have to tip  my hat to Dave Mustaine & company for putting a cool heavy spin on such a killer, classic tune.

Overall, Super Collider is a bit of a grower. While this isn’t Megadeth’s best album, it is far from their worst, and it does continue to get better with multiple plays. There is some filler on this album, but the good tunes far outweigh the bad ones.  Give Super Collider a chance, and I think you will like it as much as I do! 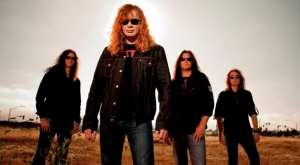 You can check out the new track below!