Frontiers Records is pleased to announce the release of TEN’s anticipated new studio album entitled “Heresy And Creed” on October 19th in Europe and October 22nd in North America.

Following the band’s successful come back in 2011 with “Stormwarning” TEN are now back with another slice of Melodic Hard Rock of Epic proportions.

For TEN’s tenth studio album singer and songwriter Gary Hughes has worked very hard to live up to the expectations that surround the band’s new album. The new lineup featuring the new axeman Dan Mitchel, Darrel Treece-Birch on keyboards and Max Yates on drums – along with long time member John Halliwell and returning bassist Steve McKenna – has complemented Hughes efforts in creating the best TEN album ever.

Musically it once again marks the perfect union between grandiose and epic Hard Rock tunes. Very melodic, hook-laden singalong songs with a scattering of immense and haunting power ballads to complete the typical TEN tapestry. Gary Hughes says: “It is a particularly strong selection of material. I feel this is possibly our most mature, and diverse collection of songs ever. There is literally something in there for everyone and every taste”.

“Heresy and Creed” is a true classic Ten and a groundbreaking, monumental album in more ways than one: classic hook laden songs. Power and melancholy with not a single ‘filler’ in sight.  Also thanks to a superb mix courtesy again of Dennis Ward, “Heresy And Creed” will prove once again that Ten are at the top of their genre. Ten are back and better than ever!

The radio edit version of “Gunrunning” can exclusively be listened in full in streaming on the Frontiers Web radio. Tune in at: www.frontiers.it/webradio 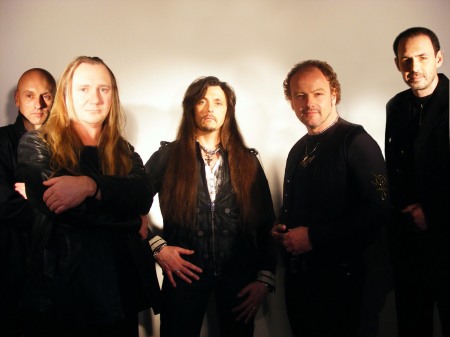 Check out the new video “Endless Symphony” from TEN.  This song comes from the CD, Stormwarning which will be released February 8th, 2011.

Frontiers Records is pleased to announce the release of TEN’s ninth all original studio album entitled “Stormwarning” on February 18th 2011 in Europe and February the 15th in North America.

Turmoil is a word that could well describe what life has been like in the TEN camp over the past few years. Going through several line-up changes and a self imposed exiles from the scene, TEN for many seemed to be a name that wrote glorious pages in the darkest period of Melodic Hard Rock, failing to keep the flame alive when the momentum was raising again.

Still, TEN singer and principal songwriter, Gary Hughes knew he had another ace up his sleeve and decided to play it safe. For the new album “Stormwarning” he wanted first to have the right line-up and he enlisted the services of Neil Fraser on lead guitars and Mark Sumner on bass, in addition to long-time members John Helliwell on guitar and Paul Hodson on keyboards.

Then the masterful Mark Zonder (Fates Warning) guested to take care of all the drum duties and Gary made sure that none other than Dennis Ward (Pink Cream 69 and producer of Angra, Place Vendome, Sunstorm, Edenbridge among others) would mix and produce the album. Finally he made contact with the original designer of the “Spellbound” and “Babylon” covers, the renowned Spanish fantasy artist Luis Royo, to recreate the perfect graphics for the new album.

In the summer 2010 with all the groundwork done, TEN finally started the recording of “Stormwarning” an album that, like the name itself tells, is an inspiration for tales of glory, war, and death and of course love. Any rock fan who digs the sound that Rainbow carved out with “Difficult to Cure” or that Whitesnake brought to success with “1987” and that Gary Moore exalted with albums like “Final Frontier” or “Run For Cover” needs to have this record in their collection. And even for the well acquainted, TEN re-ignite memories of “The Name of The Rose” and “Spellbound”.

Endless Symphony; Centre Of My Universe; Kingdom Come; Book Of Secrets; Stormwarning; Invisible; Love Song; The Hourglass And The Landslide; Destiny; The Wave.

The radio edit version of “Endless Symphony” can exclusively be listened in full in streaming on the Frontiers Web radio. Tune in at: www.frontiers.it/webradio

With Mark Zonder: Drums and Percussion