The Bitch is Back…Live is a brand new live album from the queen of Hard Rock and Metal LITA FORD.  Hot on the heels of her TRUE comeback album “Living Like a Runaway”, LITA took to the stage at the Canyon Club in Agoura Hills, California in early October of 2012 to showcase the new material as well as LITA FORD classics. Originally set for release October 22nd in North America, the album will now be available November 5th.

This killer show was recorded for the live album The Bitch is Back…Live.  Where does the title come from?  LITA opens the show with her rendition of the classic Elton John track “The Bitch is Back”, which was previously released as a bonus track on “Living Like a Runaway”.  It may be a strong proclamation, but it is true…the bitch is back and bringing it live.  Now fans have a chance to be a part of this memorable evening and performance.

The album will be released as a digipak with a special booklet including fan photos and download. Release dates are USA/Canada on November 5th, Germany on October 25th and Europe on October 28th through SPV/Steamhammer. 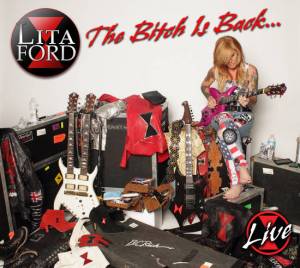 1. The Bitch Is Back

9. Dancing On The Edge

Drums on “The Bitch Is Back…Live” by Scot Coogan