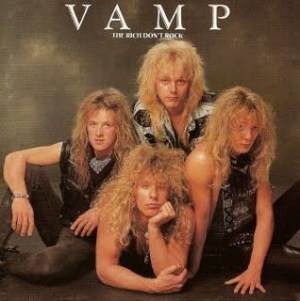 When I recently found Vamp’s debut CD, The Rich Don’t Rock, I had to buy it. I could only vaguely remember this hair metal act from the late 80’s. I use to own this on cassette ages ago, but I couldn’t recall anything about the music. Judging from the CD cover, I was pretty sure that the music on this disc was going to be pure cheese. My incessant need to find the rarest rock on the planet wasn’t going to stop me from picking this up.

Oddly enough, this band is far better than I expected them to be. Vamp is not a Sunset Strip, Van Halen wanna be.  They are a German hard rock act whose musical roots seem to stem deeper than the rock coming out of Los Angeles in the 80’s. Ricolf Cross dishes out some wicked six string work on this CD. I am extremely impressed with his playing.  Where is this guy now?

Singer Tom Bellini’s voice takes a little bit to get used to, but it grows on you. He kind of reminds me of a higher pitched Kevin DuBrow.  Drummer Dicki Fliszar gets some moments to shine too. He has a pretty cool drum solo in the tune “All Nite”. I thought that was unusual, and cool all at the same time.

Very little information is available on the guys in Vamp. The Rich Don’t Rock is their only CD. Drummer

Dicki Fliszar went on to play drums in the band SKIN.  The rest of the gents in the band are at large in the musical world. If you know what these guys are up to today, let us know.

Is The Rich Don’t Rock worth picking up? If you can find it, absolutely.  This CD has been out of print for a long time and is very hard to find.  There are a bunch of quality rockers on this disc, and I am definitely getting a kick out of them.  I am glad I rediscovered this band in 2009. Everyone needs a little Vamp before Halloween right?!

You can listen to the song, “Heartbreak, Heartache” and “Renegade” at the band’s myspace page.