Broken Teeth has released a new video for their song, “Bullet”  This song is from the excellent 2010 album, Viva La Rock, Fantastico! from Jason McMasters & Company! Check it out!1

Broken Teeth have released a new video for the title track of their new album, Viva La Rock Fantastico. This song & video also features Danko Jones on vocals. Check it out! 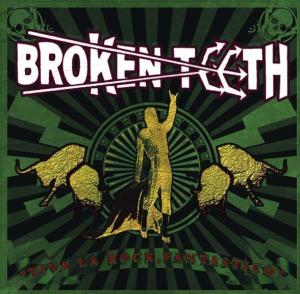 I have been a fan of Jason McMaster for a long time.  From Watchtower, to Dangerous Toys, to Broken Teeth, I have pretty much enjoyed all of the bands he has performed in. With that being said, it is hard for me to believe that Broken Teeth has already matched the number of studio releases as Jason McMaster’s other band Dangerous Toys, but they have done just that. With their latest release, Viva La Rock, Fantastico, McMaster and company may have released the finest Broken Teeth record to date.

Viva La Rock, Fantastico sounds as if Broken Teeth walked into the studio and performed the same kind of high energy set that they do live. It is a no frills hard rock effort cram packed with crank worthy tunes to help you get your party started.

Viva La Rock, Fantastico explodes out of the gate with fast paced rocker “Blackheart”. The Motorhead like feel to this tune instantly had me wanting to play the air drums. “Exploder” delivers that one-two punch for this CD.  If “Blackheart” didn’t reel you in, “Exploder” will get the job done with its breakneck rhythm and energetic riffs.

At this point Viva La Rock Fantastico is merciless with its high-speed tunes. You don’t get a moment to catch your breath until the song “Break the Spell”.   This tune does a very good job of  breaking up the pace with its AC/DC inspired riffs.  This song may lack in originality, but Broken Teeth deliver it with such conviction, you will hardly care. McMaster’s razor-sharp vocals, and the riffs of Tuten & Beeson are damn near perfect here.

Jason McMaster has made no secret that he is a fan of Danko Jones.  The song “Twister” has similar pacing as some of Danko’s previous work. Borrowed ideas or not, “Twister” is one hell of an infectious tune.

The guitar riff on “Back On The Road” is so insanely catchy that I consider this song, one of Broken Teeth’s best. I can’t this song out of my head.

Much like “Twister” before it, “Bullet” also that similar guitar rhythms as Danko Jones.  This is another fun tune that I like a lot.

If you like your hard rock raw, and not over produced, you are going to love this CD.  The songs are fairly short in length.  What they lack in length, they deliver in punch. Viva La Rock Fantastico is one of my favorites of 2010.  Don’t miss this!

You can purchase your own copy of Viva La Rock Fantastico at this link. 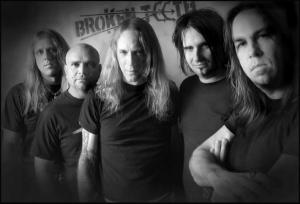 Once again, Diablo Rockers Broken Teeth are  playing with fire on the release of their hell-stomping new album, “Viva la Rock, Fantastico!”….

Featuring 13 all-new tracks and cameo vocals by Canadian compadre, Danko Jones, “Viva la Rock, Fantastico!” (Perris Records) was written on the road during Broken Teeth’s 2008-2009 “Blood on the Road Tour.” As expected, the fifth release from the hard-bitten Texas head-knockers is torn from the same hellraiser’s hymnal that gave us the likes of Motorhead, AC/DC, Rhino Bucket and other wheels-of-steel rockers…..

“Viva la Rock, Fantastico!” is another evil sermon of devilish delights and rock-altar anthems. From the torch-fire, rat-a-tat blast of “Blackheart” and the frantic missile-scream of “Dressin’ Up in Flames” to the nervous shakedown of “Break the Spell,” and the aptly titled “Exploder,” “Viva la Rock, Fantastico!” finds Broken Teeth’s six-string pitchfork attack taking equal jabs at feverish fun (“Twister” and “Bullet”) and pleasurable pain (“Spitting Nails” and “Get Outta Here Alive”)…..

“This is the first Broken Teeth album written by the band’s current lineup,” McMaster said. “In a sense, it marks a new beginning while still maintaining our signature sound. We definitely get the fists in the air, but we also like to give the girls a little something to grind to. If it ain’t down-and-dirty, it ain’t rock-n-roll.”….

“I met a Broken Teeth fan from Scotland online and she sent me some CDs of upcoming new music,” McMaster explained. “One of the CDs was Danko Jones. I shit myself! I knew there was real rock-n-roll out there somewhere and I had finally found it. A few years later, Danko was coming through Austin with Turbonegro. I went to the show, introduced myself, gave Danko some CDs and stayed in touch. A few years later, he’s singing on my music.”….

Broken Teeth formed in Austin, Texas, in 1999 when McMaster (Watchtower and Dangerous Toys) recruited former members of Dangerous Toys, Dirty Looks and Pariah for a side project that allowed band members to have some fun indulging their dirty rock influences including AC/DC, Rose Tattoo, Circus of Power and The Four Horsemen. More than a decade later, Broken Teeth has firmly established its own tattered and frayed identity with a discography that includes the self-titled debut, “Guilty Pleasure,” “Blood on the Radio” and “Electric.” ….

As new track “Back on the Road,” makes clear, “Viva la Rock, Fantastico!” will keep Broken Teeth spitting the gospel of rock-n-roll !….