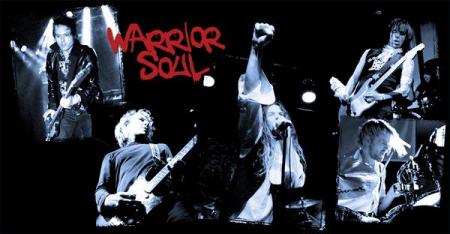 Warrior Soul is back in action with a new album, “Destroy The War Machine, and video “Bad News Rock N’ Roll Boyfriend”.  Check out the clip below!

Acetate Records will release WARRIOR SOUL‘s “Destroy The War Machine” through MVD Audio on July 14, 2009. The eight-song album, which was originally released last year under the title “Chinese Democracy”, includes a cover of IGGY POP‘s “Knocking ‘Em Down (In The City)”. This time around, you won’t hear any hidden meanings or agendas in the lyrics, controversial frontman Kory Clarke tells it like it is and calls a spade a fucking shovel. His ever-present vocals make the band unique and immediately identifiable. A full-scale tour of the United States and Europe will follow.

WARRIOR SOUL bassist Janne Jarvis previously stated about “Destroy The War Machine”: “[This album] has everything a WARRIOR SOUL fan should expect from a WARRIOR SOUL record. It has an ear for an argument, puke on its shoes and remains untouched by trends or the long-arm of the corporations.”

Transcend’s main man Rob Ferguson said “I am really excited about the prospect of working with these three awesome bands. They represent the continuing development of our Rock and Metal music stable which is brimming with talent and quality product. Our roster reflects our policy of blending legendary established talent with the best of fresh and breaking acts”

Warrior Soul:
Iconic frontman Kory Clarke’s vision permeates the proceedings: The band he created, Warrior Soul, which started from his spoken word performances on New York City’s Lower East Side. From the trippy Doors-influenced debut to some of the punk-oriented and metal material, Kory is a man on a mission, combining tradition with avant-garde creativity. We have a sneaking suspicion that the best may be yet to come…

Warrior Soul have revealed that they have almost run out of copies of their latest album Chinese Democracy and that the album will not be printed again.

In an update the band said “There is only a few copies left of Warrior Soul’s Chinese Democracy. We will not print another edition, we’ve accomplished what we wanted and hopefully everyone who wanted a copy of our Chinese Democracy already bought it. If you are very fast and order before the weekend you might be able to lay your hands on a copy. You will still be able to order the new album but it will have a new name and it will look different.

More info on the details will be posted here very soon.

We know that some of you have been waiting a very long time for your pre-ordered CD and we apologize for this. It’s the people that ordered their copy from the US before the 2nd of November that have been affected by this. We ran into problems that were out of our control with the mailing of the CD’s but the one’s that hasn’t got their copy yet should have it any day now. Once again, we apologize, thank you for your patience. Thank You for supporting Warrior Soul.

Everyone who ordered from outside the US or after the 2nd of November can expect their CD to arrive before the end of November as promised.

Today we have posted a new track from our new album on MySpace, it’s called ‘Don’t Believe’ and hopefully you’ll enjoy it. Play it loud!

There is loads of good news coming up for both the band and any fan of Warrior Soul in the next year. 2008 was a great year with a new album, great tours and even greater fans. But we did go through a lot of bullshit as well after being swindled by our so called management and the people involved in it. Real friends of Warrior Soul stepped up and saved the band to make the US tour possible. We are very grateful and hopefully we can return the favour some day. Thank you, Thank you, Thank you (You know who your are.).

Also a big thank you to our friends in SHRAM, a band consisting of 3 great dudes (plus Mr Hartless Sr. of course…) delivering great rock and great musicianship. http://www.shramband.com/

The Stoned – The best of Friends and partners in the weirdest crimes (Just go see for yourself. I wouldn’t try to explain this spaceship in words.)! http://www.thestoned.net/

All the other bands, venues, promoters, bar staff and sound engineers we’ve met and that didn’t suck, thank you!

And to all the American Warrior Soul fans, we did this tour for You and You only. Hopefully You enjoyed it, thanks for coming out to the shows!

We will see some of you very soon in the UK. This will be the last couple of shows of the year and you can expect every single one to be special with a mix of new songs and tons of old classics. We will play as loud and hard as ever before (If you don’t see blood on my guitar… ask your money back!). To everyone who can not make it to the UK, don’t worry, Warrior Soul will hit the roads again in 2009.”

UK rockers ZEN MOTEL and THE STONED will be guests on Warrior Soul’s forthcoming UK tour. Dates are as follows: 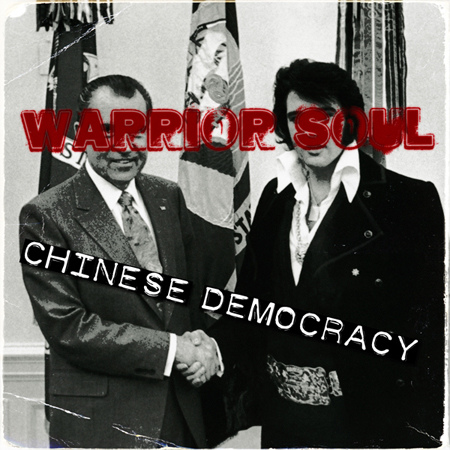 Blabbermouth.net is reporting that WARRIOR SOUL, the band fronted by legendary singer Kory Clarke, is the latest act to announce (jokingly or not) that it has selected “Chinese Democracy” — the name of the perennially delayed new GUNS N’ ROSES LP — as the title of its new album. The CD will be available exclusively at shows on WARRIOR SOUL’s forthcoming U.S. tour, which begins on October 16 at the Double Door in Chicago, Illinois.

WARRIOR SOUL’s “Chinese Democracy” will receive its retail release in January. UK fans will also have an opportunity to buy the album at shows during WARRIOR SOUL’s UK tour in December.

This is the first WARRIOR SOUL studio album to include the new lineup featuring;

Recorded and written over a five-week period in Stockholm, Sweden and in the UK, WARRIOR SOUL’s “Chinese Democracy” was produced by Clarke, Lundell and Jarvis.

Stated Clarke: “I’m really proud of this album. It’s been great to make another WARRIOR SOUL record and this line up is the best I’ve ever had.” He continued, “People have been waiting for a long time to hear this record and I’m thrilled to finally release ‘Chinese Democracy‘.”

Co-producer and bassist Janne Jarvis had this to say: “This is an exciting, vital collection of songs. It’s unadulterated and uncompromising. It is essential WARRIOR SOUL.”

WARRIOR SOUL’s current lineup has successfully toured Europe over the last two years and reports from both fans and media suggest that this is the band’s strongest formation yet.

Video footage of WARRIOR SOUL performing the song “Let’s Get Wasted” at Ace of Clubs in New York City on May 31, 2008 can be viewed below. The show marked WARRIOR SOUL’s first American concert in twelve years.

WARRIOR SOUL released a live album on April 14, 2008 through Livewire/Cargo Records. Entitled “Live In England”, the CD was recorded in London during the band’s October 2007 tour.