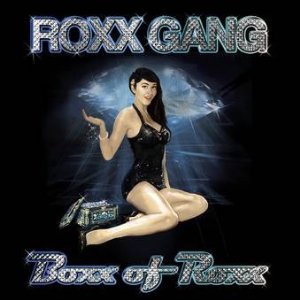 The semi-famous, yet quite memorable, hair metal talent, Roxx Gang, have recently released a swan song box set titled, Boxx Of Roxx. This gem contains all the goods that a hair metal fan could want. The set contains a disc of previously unreleased rarities, a disc of live music, and a DVD of videos. Many may question whether a group that had such a short lived time with their original lineup (1989 – 1991) should be worthy of releasing a box set. What they would fail to realize is that Roxx Gang continued on, releasing several solid albums in the mid and late 90s after hair metal was left for dead.

While purists who love the band will be the first to scream that Roxx Gang is not hair metal (more of a hybrid of punk and blues), the music speaks for itself…this is hair metal. There are some bands that were never comfortable with the hair metal moniker (Def Leppard, Dokken, Bon Jovi) and Roxx Gang is one of those bands. However, it should not be deemed an insult to be labeled a “hair metal” band. In fact, it should be an honor. Listening to the rarities disc on Boxx Of Roxx makes it obvious that this is hair metal music and it is pretty darned good.

The disc of outtakes harkens back to the bands early days with unreleased radio edits of beloved songs such as “Scratch My Back,” and “No Easy Way Out.” These songs show up again on the live disc and videos DVD. Seeing as how they are the most cherished songs in the Roxx Gang repertoire, it makes sense that they would be contained on all three discs.

The real gems on Boxx Of Roxx are the recordings with original guitarist Eric Carroll who died mysteriously in the late 80s before the band gained their true notoriety. Boxx Of Roxx takes the listener on a time-traveling journey, spanning the entire career of Roxx Gang, but the three Eric Carroll tracks stand out as the ones with the most potential. They are, after all, the songs that got the record companies attention in the late 80s and rightfully so.

The live disc was recorded in Texas in 1989 featuring the bands most famous and beloved lineup. Ripping through their hit songs and early material, this live album gives us a taste of what a Roxx Gang show was like back in their heyday. Those fortunate enough to have seen the band live, witnessed a real treat, as Roxx Gang built their reputation on their live performances. It would have been nicer if the band was able to release this concert as a DVD for the set, but fans should be ecstatic with the existing audio to enjoy.

Overall, if you’re a hair metal fan, a lover of Roxx Gang, or someone that enjoys re-discovering some of the forgotten acts of the 80s, Boxx Of Roxx is worth the investment.

Track Listing:
DISC ONE – ROUGH DIAMONDS
Scratch My Back
No Easy Way Out
Danger
Kill Or Be Killed
Ballbreaker
Hot Shot Of Love
Into The Black
Steals My Heart Away
Time To Rock
Seven Deadly Sins
Rockin’ Horse
Who’s Your Daddy?
Santa Clause Is Back In Town