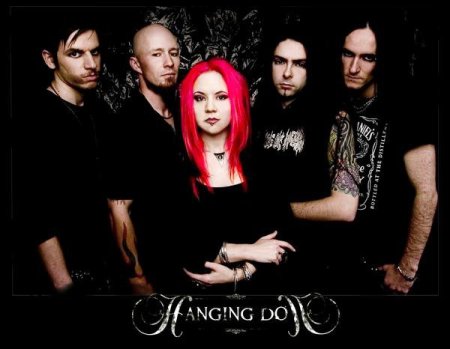 A busy week for gothic orchestral metallers Hanging Doll sees them release “The Sacred & Profane” on 3rd September 2012 on Rocksector Records, whilst making the song “Dark Narcissus (The Forest)” available immediately for free mp3 download. A new video featuring the title track from the album has also been made available featuring a combination of live footage & studio sessions, meanwhile Powerplay magazine have recognized the band with a double-page feature in the September issue out now.

Critical praise has been forthcoming not least from Dom Lawson of Metal Hammer who describes the album as “Bold, epic & inventive with Sally’s glorious voice leading the charge.. this is superlative gothic heaviness with brains, balls & bags of ideas”

The first video, “Carnival Of Sin” released earlier this year has attracted in excess of 13,000 views on Youtube & whilst the shorter catchy side of the compositions is shown there, the new video reveals some of the deeper, darker, progressive elements of the album.

2012 has been a year of high points with Hanging Doll already playing as special guests with legendary former-UFO & Scorpions guitarist Michael Schenker, visiting France, Austria & Czech Republic on that tour. Looking ahead they play a showcase event on 23rd November at London Underworld, with German metallers Mono Inc. & on 15th December the band returns to Manchester, playing at Moho Live in Rocksector’s “Winter Fuel” showcase – more details to come.

“The Sacred & Profane” is released today (3rd September) & is available to buy now on CD at online stores such as Play.com, Amazon.co.uk & HMV.com, & to download at iTunes.

Get the free download of “Dark Narcissus (The Forest)” at this link!