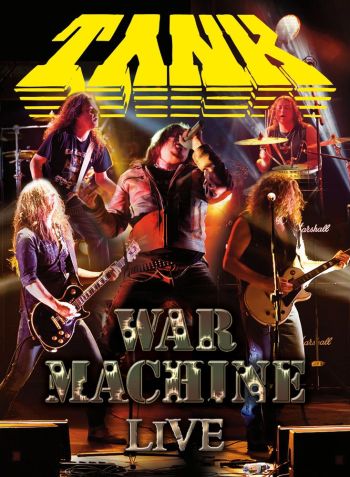 As previously announced the legendary British band Tank release in November their first live DVD. The material entitled “War Machine Live” features live performances filmed in Poland in 2011 and 2012 plus band interviews, on the road footage and more. As part of the promotion of the DVD and their most recent album “War Nation”, Tank prepared a video for the title song taken from the album. You can see the video clip on Metal Mind Productions’ official channel on YouTube in THIS location.
Cliff Evans, guitars comments: “This is the brand new video for the title track from our  latest album ‘War Nation’. It’s ‘no frills, bullet to the head’ classic British metal at it’s very best. We hope you enjoy it and stay tuned for more videos to come from the ‘War Nation’ album.”

Tank online: www.tankofficial.com
Tracklist:
1. This Means War
2. Judgement Day
3. Echoes of a Distant Battle
4. Phoenix Rising
5. Feast of the Devil
6. Honour and Blood
7. Great Expectations
8. T.W.D.A.M.O
9. Don’t Dream in the Dark
10. Power of the Hunter
11. (He Fell in Love with a) Stormtrooper
12. The War Drags Ever OnBonus video:

„War Nation” video
Interview with Mick Tucker, Cliff Evans, and Doogie White
Live at Metal Hammer Festival 2011
At the Studio / On the Road