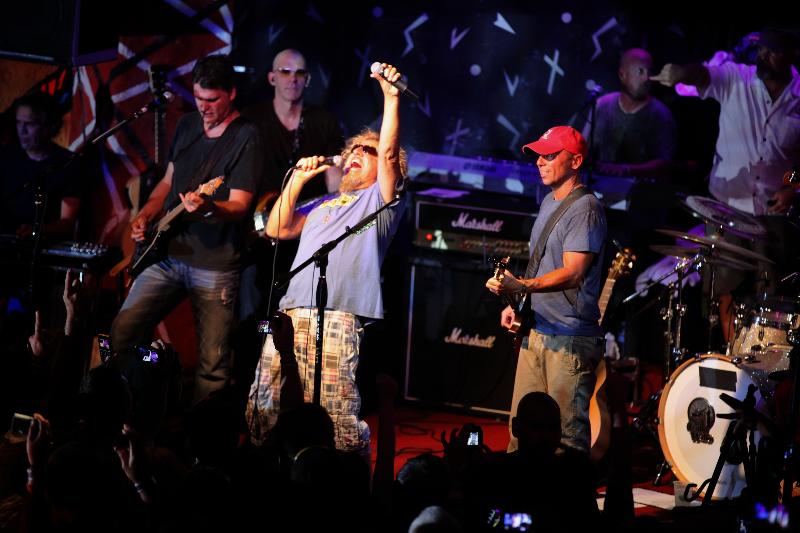 Sammy Hagar kicked off his 65th birthday this week with a star-studded lineup of friends who’ve rocked the stage each night in true Birthday Bash style.  This year’s jam session is one for the record books with Kenny Chesney rocking the house on October 12. On October 11, Jerry Cantrell (Alice in Chains), Matt Sorum (Velvet Revolver, Guns N’ Roses) Michael Anthony (Van Halen), Billy Duffy (The Cult) and Denny Carmassi (Montrose) hit the stage with Hagar.  When Hagar joined Cantrell, Duffy and Sorum on stage for performances of “Loud” and Alice in Chain’s “Man in a Box” the crowd went crazy.

For twenty years Sammy Hagar has been celebrating his birthday with epic bashes at his Cabo Wabo Cantina in Cabo San Lucas, Mexico.  Thousands of fans of the Red Rocker make the pilgrimage south of the border each year to celebrate Sammy’s birthday.  This year’s concerts with Sammy, his rockstar pals and his band, The Wabos have played October 7, 9, 11 and tonight, the 13th. An additional concert was added last minute when country superstar Kenny Chesney announced his birthday present to the legendary rocker would be a performance of his own last night, Friday the 12th.
Said Hagar about this year’s Birthday Bash, “Man, this is hand’s down the best birthday bash yet!  Hangin’ at the beach with my family and friends, then my buddy Emeril cooked us an amazing dinner and we all headed to the Cabo Wabo where Kenny Chesney brought the whole band down and tore it up for 3 hours! The fans were so off the hook I just had to hit  the stage and jam on a couple songs with Kenny —  and we even got Emeril on stage with us to sing back up on  ‘I Can’t Drive 55.’  I’m 65 tomorrow and RIGHT NOW – it doesn’t get much better than this!”

Visit http://youtu.be/8A_247Dyl3o to see exclusive video of the event.