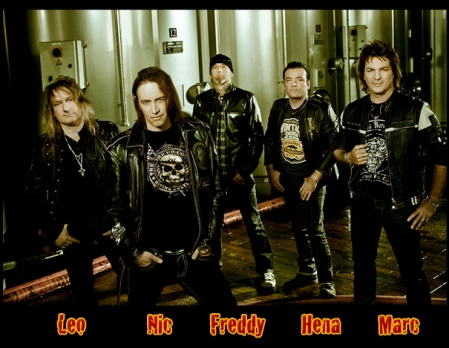 Just in time for the start of the Swiss tour and on the last part of their successful “Firebirth” world tour 2012, GOTTHARD heats things up with “Give Me Real” their new fan video!

What usually requires long days of shooting with countless takes was made in Chile in an afternoon “First Take.” The result is pure emotion! Like hardly any other clip it captures the magic between the band, fans and live performance.

The video was shot spontaneously at the start of the Tour during the sound check. It was only the second show with singer Nic Maeder and is the fastest video shoot of the band’s history. The director from South America only needed one run-through. The film was shot in Chile, home of creative TV talent. In addition to the band, two known South American actors can be seen, the only 25-year-old Leon Bravo and the 24-year- old Paula Pardo.

“We were immediately enthusiastic about the idea when the director came up with the idea of making the clip on tour in Chile” says bassist Marc Lynn. “We were all curious to shoot in South America and to work with a local team. Also the fact that we were on tour and did not have two whole days as usual for a video shoot but only a few hours in the afternoon, was an exciting challenge. We got to know a lot from the people there and their sweeping, spirited way of working.”