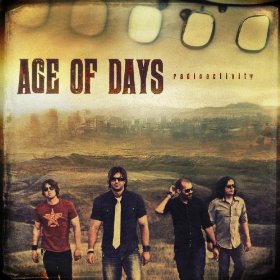 It seems like every couple of years or so, there is a new modern rock act to catch my attention.  In the case of Age of Days (formerly known as Age of Daze), they aren’t new at all. The band has been around since 2005, and their latest release Radioactivity is their second album.  Their first album, Hollywood Ending, was released in 2008.   Judging from the songs on Radioactivity, I need to seek out Age of Days’ first album asap.

Radioactivity is packed with a bunch of radio ready singles that could spawn a bunch of hits for these Canadian rockers.  Age of Days sound may not be original, but in their music, I hear a great blend of bands like Theory of a Deadman, Nickelback, My Darkest Days and Hinder.  In fact, Sal Costa (ex-My Darkest Days) co-wrote and played guitars on the song “Now or Never” along with Hinder’s Cody Hansen on drums.  Their music might be derivative of these other modern hard rock acts, but with an album as good as Radioactivity, I could care less.  Age of Days have crafted a bunch of catchy tunes, that with a little bit of luck, could help make them a very successful rock act in the U.S. and beyond.

Radioactivity has a good mixture of modern pop rock/hard rock, and there isn’t a bad song in the bunch.  Of course, my favorites on Radioactivity are the hard rockin’ numbers “Bombs Away”, “Justify”, “I Did It For Love”, “Ready to Go”  and “All I Know”.

Radioactivity is an album that I can listen to, from beginning to end without the need to skip songs. I have enjoyed this album greatly, and I think you will too.

You can pick up Radioactivity at Amazon.com & at iTunes. Check it out! 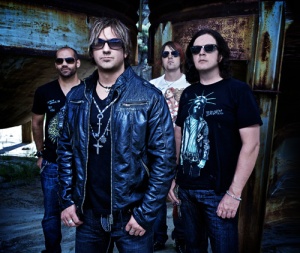 Age of Days is: